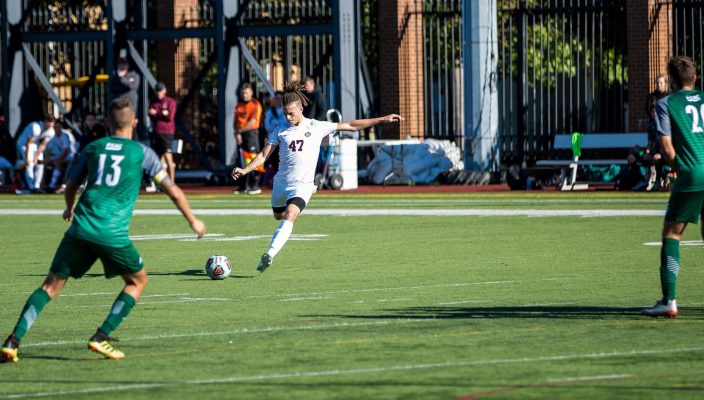 Back on top: Knights soccer is in the Top 5

The Gannon University men’s soccer team found itself back inside the Division II Top 5 following successful outings against Pitt-Johnstown and Seton Hill.
Lennox Crews, Tinashe Katsande and Ben Andrews each scored a goal inside five minutes to give the fifth-ranked Knights a very early 3-0 lead Oct. 30 against Pitt-Johnstown at McConnell Family Stadium.
And contributions from Abdulla Say, Ivan Manfredi and Joe Knox and another goal from Katsande helped the Knights take home a comfortable 8-1 victory in their regular-season home closer.
Gannon goalkeeper Chandler Hallwood faced almost no challenges throughout the match as the Knights kept the Mountain Cats honest in the midfield.
The win clinched a playoff spot for the Knights in the Pennsylvania State Athletic Conference, and Saturday’s 4-1 road victory over Seton Hill left Gannon with an overall record of 14-1 and a 7-1 mark in conference play.
The Knights have now won eight straight games since their 1-0 loss to California University of Pennsylvania on Oct. 5, and during that stretch they have outscored the opposition 36-5.
Against Seton Hill, Gannon got on the score sheet early in the 14th minute from a throw-in that found itself at the feet of Manfredi, who buried the close-range effort for a 1-0 lead.
Alex Lee Yaw returned to his top-tier form, scoring goals in the 41st and 58th minutes to give the Knights a 3-0 lead. Lee Yaw was named PSAC Athlete of the Week Monday for his performance.
Say scored the fourth goal of the contest and put the match out of reach for the Griffins despite a late goal from Seton Hill’s Lloyd Davies.
The Knights shift their attention to the second Erie Derby of the season at Mercyhurst University at 7:30 p.m. Wednesday as they look to sweep the season series from their crosstown rivals.
On the women’s side, Gannon found itself on the right side of a hard-fought, physical match against Edinboro on Oct. 30, as the Knights came away with a 1-0 at McConnell Family Stadium.
Edinboro came into the match as the best team in the PSAC West and played like a top team all match long.
The Fighting Scots had more chances in the first half, but the Knights held on to keep the match scoreless going into halftime.
Tactical changes from Gannon coach Colin Petersen saw the Knights play more dominant in the second half and get clear chances on goal, but they did not get a score from it.
As the match wound down, defensive errors from Edinboro gave the Knights a corner kick in the 83rd minute, and the entire Gannon team pressed forward into the box.
Megan McCartney took the corner kick and found the head of Leah Bermudez, who headed the ball to the lower left corner and out of reach of Edinboro goalkeeper Anna Voelker.
Gannon goalkeeper Kennedy Solymosi finished with six saves to help preserve the win. Solymosi was named the PSAC West Division Athlete of the Week Monday.
The win pushed the Knights to 7-6-2 overall and 6-6-2 in PSAC play as they get set to travel to Clarion Wednesday for a 7 p.m. match and a chance to keep their playoff hopes alive.
Following Wednesday’s game, the Gannon women will visit Slippery Rock for 2:30 p.m. matchup Saturday in the final regular-season match of the season.
PSAC Tournament play will get under way Tuesday in both the men’s and women’s divisions at a time and place to be determined.