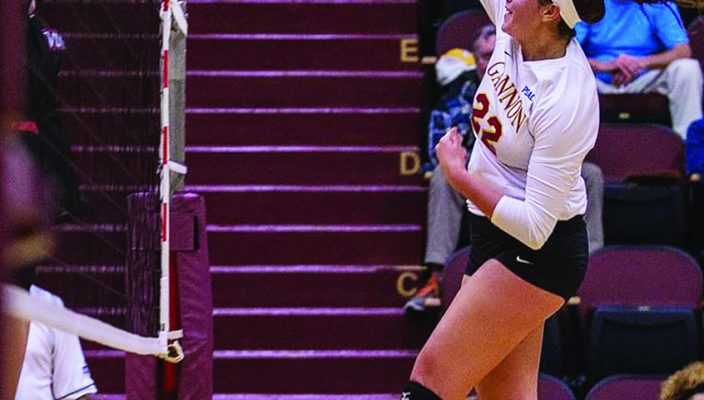 The Gannon University women’s volleyball team had a successful Halloween weekend, sweeping both California University of Pennsylvania and Seton Hill to run its win streak to six.
The victories left the Knights with an overall record of 21-5 and a 13-1 mark in Pennsylvania State Athletic Conference Northwest play.
Gannon will return to action at 7 p.m. Wednesday against Daemen in a nonconference matchup, then travel to meet Pitt-Johnstown and Indiana University of Pennsylvania Saturday and Sunday, respectively. Both matches start at 1 p.m.
The Knights had little trouble disposing of Cal U on Halloween night at the Hammermill Center.
After the Vulcans stole the first point of the match, the Knights took control with an 8-1 run.
Gannon continued to apply pressure, doubling up California, 14-7, following a massive kill from Ashley McClung. The Knights went on to dominate the first set, 25-13.
Gannon stayed in an offensive rhythm in the second frame, running out to a quick 6-1 advantage. The Knights then stretched their lead to 15-5 when McClung smashed a kill past the Vulcan defense.
Gannon went on to win the second set, 25-14. As a team, the Knights recorded a .472 hitting percentage in the frame.
Gannon jumped out to a 6-3 lead in the third frame after a kill from Ally Smith. California then battled back to lock the frame, 8-8.
The Knights answered, building an 18-11 lead after a kill from Smith to force a Vulcan timeout. Gannon then closed out the set, 25-11, capping a strong match by the Knights.
Gannon posted a season-high .432 hitting percentage in the match and owned the edge in kills, assists and digs by a wide margin.
Ashley Kerestes led Gannon with 14 kills while Smith added 10 kills and Ashley Beyers had 41 assists.
Toni Leitshuh also appeared in her 131st career match to move into first place on the Gannon all-time matches played list.
Against Seton Hill, Gannon capitalized early on the Senior Night/Alumni Night Hammermill Center crowd, running out to an 11-4 edge after a kill from Lauren Sampson.
The Knights didn’t let off the gas, pushing their lead to 20-10 following a kill from Beyers, who on Monday was named PSAC Northwest Athlete of the Week. Gannon went on to win the first frame, 25-15.
Gannon continued to stay in an offensive rhythm in the second set, opening a 6-1 lead to force a Seton Hill timeout. The Knights then stretched their edge into double digits after back-to-back kills from Sampson to make the score 20-10. Gannon took the second set, 25-18.
The Knights began to pull away in the third frame, creating a 17-9 lead after rattling off five straight points highlighted by two service aces and two kills from Sampson.
Gannon then put the match out of reach after Leitshuh served two straight service aces to make the score 21-10. Gannon went on to win the frame, 25-16.
Sampson and Smith each had 12 kills, and Beyers tallied 37 assists.
Gannon has not lost a home match all season as the Knights improved to 12-0 after their most recent wins. Their last loss at home was over two years ago on Oct. 28, 2017.
The win over Seton Hill was also Gannon’s 18th straight set win, the longest streak since the Knights had 27 in 2018.