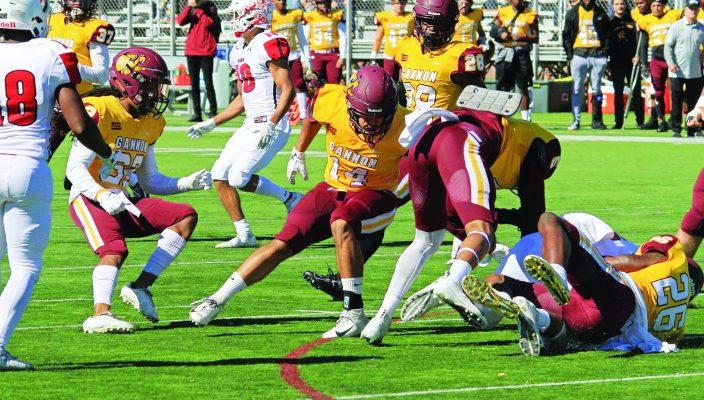 The Gannon University football team traveled across town to Saxon Stadium Saturday to play crosstown rival Mercyhurst, and the Knights dropped their fifth straight game, 28-7.
Both teams’ offenses had trouble getting on the board for the first 30 minutes of play. The first half ended on a long drive for the Lakers that stalled at Gannon’s 1-yard-line as time expired.
Mercyhurst finally broke the tie on its second possession of the third quarter with an 80-yard pass from Doug Altavilla to Clay Waldron for the touchdown and 7-0 lead.
The Knights tied the game five minutes later when Rashad McKee completed a pass to Bransen Stanley for 35 yards with four minutes left in the third quarter.
An 85-yard, five-play drive immediately put Mercyhurst back in the lead by seven, sending the game into the fourth quarter with Gannon down 14-7 and in possession of the ball.
Following a three-and-out from the Knights, the Lakers rolled into the end zone in seven plays covering 82 yards without facing a third down to take a two-touchdown lead with about 10 minutes remaining.
After trading punts Mercyhurst took the clock down on a long drive resulting in a touchdown, leaving Gannon the ball with under two minutes to play and a 28-7 deficit.
That proved too big a hill to climb for the Knights, and they fell to 2-7 overall on the season and 1-5 in Pennsylvania State Athletic Conference play going into Saturday’s noon matchup with ninth-ranked Slippery Rock at McConnell Family Stadium.
Saturday’s loss to Mercyhurst also featured a scary moment for both teams.
Five minutes into the third quarter, Gannon freshman defensive back Jayden Ashby fell to the ground after a collision with a Laker.
Ashby was taken off the field on a stretcher and taken to a hospital. He was released shortly after being diagnosed with a concussion. Ashby leads the Knights in picks as he added his fourth of the season before leaving the game.
Gannon entered the game ninth in the nation in interceptions with nine and continued a 10-game turnover streak. The Knights also recorded a season-high four sacks.
Mercyhurst senior quarterback Altavilla made his last home start for the Lakers Saturday and left his mark as the only quarterback in school history to hit the 7,000-yard mark in career passing yardage.
Altavilla threw for 315 yards and two touchdowns on 15 completions.
For the Knights, freshman quarterback McKee got his first collegiate start with usual starter Jimmy Keefe out with illness and Jason Dambauch out with an injury.
McKee completed 11 of his 26 throws for 115 yards along with the Knights’ only touchdown of the day.
Gannon managed only eight first downs to 18 for Mercyhurst, and the Lakers outgained the Knights 465-145.
Gannon , which punted eight times, rushed for just 30 net yards on 29 attempts.
Bransen Stanley caught four of McKee’s passes for 63 yards, including the touchdown.
On defense, Tre McNeill and Jeremiah Brennin each finished with seven tackles and Jeremy Mensah added two sacks for Gannon.
Following Saturday’s matchup with Slippery Rock, the Knights will close out their 2019 schedule by traveling to Lock Haven to take on the Bald Eagles at 1 p.m. Saturday, Nov. 16.