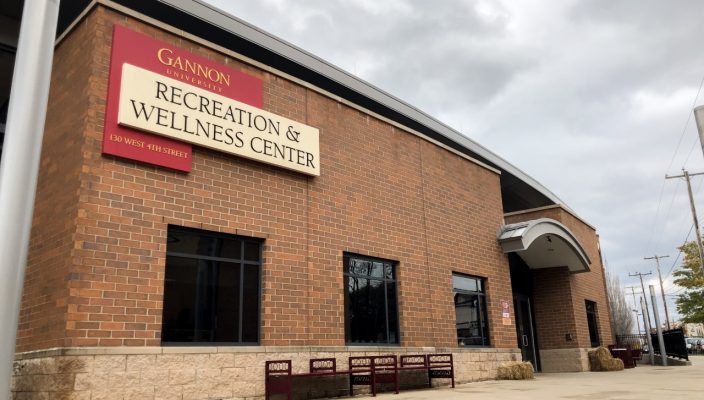 A handful of Gannon University student athletes developed a staph infection of the methicillin-resistant Staphylococcus aureus (MRSA) strain early last week, causing uninformed students to panic and university officials to begin disinfecting several portions of the Recreation and Wellness Center.
Rumors spread about the severity of the outbreak, how it occurred, what areas of the Recreation and Wellness Center were affected and how many students were infected. Teams continued to practice using the Rec facilities while cleaning procedures were carried out.
At this time, it is unclear how the infection began, or in what part of the rec center it started.
Alexa Harding, a sophomore on the competitive dance team, said that her team’s practice schedule wasn’t affected much, and her team was notified in a timely manner so that they knew how to protect themselves.
“I was informed by word of mouth first, then the athletic training room sent out a statement saying that it was closed for cleaning,” Harding said. “My coach addressed it via a series of BAND app messages later that evening.”
Harding also said that Meghan Foran, coordinator of athletic operations at Gannon, spoke to different sports teams that use the Rec Center facilities throughout the day Thursday to explain cleaning procedures and offered tips on how to stay healthy and avoid MRSA.
Overall, university officials were unclear about how the infection started, as well as how many students have been affected and what the disinfecting procedures were.
While a university-wide statement was not made, Doug Oathout, chief marketing and communications officer at Gannon, said that information was communicated to coaches, who then shared it with their teams that use the Rec facilities.
According to Lisa Goddard McGuirk, director of athletics at Gannon, the staph infection was brought to the athletic department’s attention on Oct. 29. While the source of the infection remains unclear, precautionary measures were put into place immediately.
“Due to the nature of staph infections, we are not sure that the students contracted the staph infection or MRSA on campus, and we are not aware they shared anything — including a team — in common,” McGuirk said.
To combat the potential spread of MRSA, disinfection procedures were carried out throughout the day on Oct. 30.
McGuirk would not specify what the exact procedures were.
However, she said that advice of faculty and medical experts was used to guide the methods of disinfection.
Students who developed MRSA, of which Oathout said there is less than a handful, were treated by Student Health Services.
None of the students required surgery, and as of Monday, their health was being monitored by health professionals.
As far as use of the Recreation and Wellness Center, McGuirk said that students and teams should continue to use the facilities as usual.
“Our athletic facilities are considered safe by the medical and facility experts we consulted,” McGuirk said.
Melanie Glennon, nurse practitioner at Gannon’s Health Center, said that MRSA isn’t as uncommon as many may think. The bacteria can be found everywhere, and she said that Gannon’s Health Center sees these types of infections multiple times a year, every year.