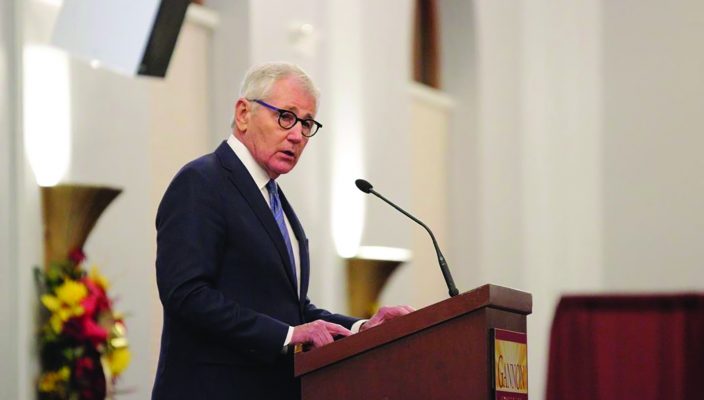 The Global Summit XI kicked off its annual speaker series at Gannon University Monday evening with the moderated talk featuring former U.S. Secretary of Defense Chuck Hagel.
Hagel, a two-time Purple Heart recipient in the Vietnam War and former U.S. Senator from Nebraska, fielded questions posed from audience members by former Pennsylvania Gov. Tom Ridge, who also served in the U.S. House of Representatives and as the first Secretary of Homeland Security.
The discussion topics ranged from geopolitical threats to divide and strife at home, as well as the pieces needed to be a leader.
Hagel also addressed the main key to maintain a forward-moving society.
“Civility is the glue to a decent society,” Hagel said. “Without that what do we have left?”
Those in attendance were thoroughly impressed with Hagel’s appearance.
Colleen Dougherty, an intern with the Jefferson Educational Society, which hosts the Global Summit speaker series, said Hagel commanded his message from the beginning.
“Hagel did a great job in his introduction of setting the stage for the issues he wanted to talk about, whether it being the Iran Deal to China to the Kurds,” Dougherty said.
“He set it in a historical context, especially by quoting Lincoln about the necessity of having institutions and organizations that matched the problems of today, not 40-50 years ago. As a young American, this recognition for the need to be adaptable by someone who has been in government for a long time makes me hopeful for things to come in America; hopefully we can find ways to adapt to the issues today.”
Jeff Bloodworth, Ph.D, head of the history program at Gannon, felt the secretary’s evaluation and opinion of the current administration was unique.
“Secretary Hagel was surprisingly frank in his assessment of the current administration’s foreign policy,” Bloodworth said. “Former Cabinet members are reluctant to criticize a sitting president, especially when they belong to the same party; I hope students and faculty recognize what a rare opportunity this was.”
Students who attended the pre-event dinner as well as the event itself were highly impressed by the secretary and enjoyed the evening.
Addison Price, a freshman public service and global affairs major, was nervous at first, but cherished the experience. “I was so nervous to actually introduce myself to Secretary Hagel,” Price said.
“But when he came and shook our hands, he said ‘Hi, I’m Chuck!’ as if we all weren’t there for him. It’s just crazy because meeting with such an important political figure isn’t something you do every day.”
Nathan Manion, a sophomore political science major, said that his big takeaway was Hagel’s main topic of choice and opinions on leadership.
“Being able to hear from such a successful person as Chuck Hagel was a great privilege,” Manion said.
“Not only did he give his take on the changing global political landscape, but he also talked about qualities that leaders should have and that is the biggest takeaway I had from his speech.”
Kara Purpura, a junior history major, thought the Secretary’s perspective on global happenings was objective and well-spoken.
“I really enjoyed the event,” Purpura said. “I think Hagel was an exceptional speaker, especially since he didn’t just blatantly speak negatively of the current administration.
“Instead, he explained the problem with pulling out of certain deals and why we need to be concerned with our alliances.
“It was nice to hear a more positive “how to fix it” view rather than the sort of no-hope outlook that we hear so often in today’s political climate. Overall, I think it was an incredible experience that I would not have had otherwise.”
In additon to Hagel, Gannon will also welcome to campus this week former White House Press Secretary and Communications Director Sean Spicer, who will be speaking in the Yehl Ballroom 7:30 p.m. Wednesday and Pulitzer Prize-winning columnist George Will, who will be speaking at the Hammermill Center at 7:30 p.m Thursday.
All events hosted on Gannon’s campus are free to Gannon faculty, students, and staff.
Call the Jefferson Educational Society at 814-459-8000 for more information.