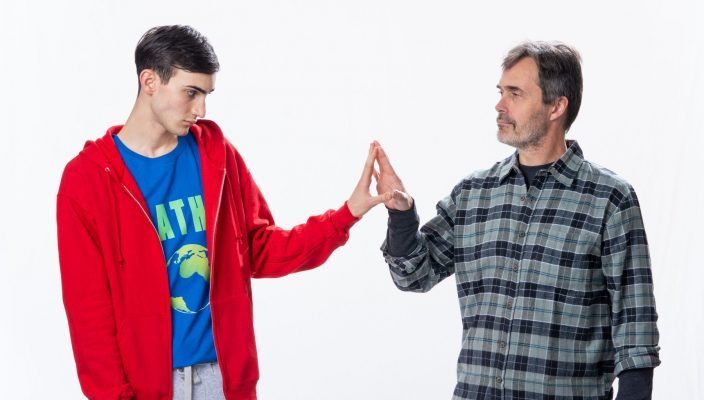 “The Curious Incident of the Dog in the Night-Time,” by Simon Stephens, based on Mark Haddon’s novel of the same name, opened over the weekend at the Erie Playhouse starring Gannon University freshman Luke Bongiorno.
“Curious Incident” tells the story of Christopher Boone, a 15-year-old boy with autism, played by Bongiorno.
The neighbor’s dog, Wellington, is killed. Christopher is found at the scene of the crime and is thus the prime suspect.
Christopher embarks on an investigation to discover who actually killed Wellington, and along the way finds out that his mother, who supposedly died two years before, is alive and living in London.
When Christopher’s father Ed, played by Nash Library director Ken Brundage, confesses to killing Wellington in a fit of rage, Christopher travels to London alone to see his mother. They eventually move back to his hometown, and his trust in his father begins to grow again.
Bongiorno said he was drawn to the show as soon as the Playhouse’s season was announced and that he was “so moved” by Haddon’s novel.
“It’s a story of acceptance at the core, and I saw a lot of myself in Christopher,” Bongiorno said.
Bongiorno said he had about a month to prepare for the role, and Playhouse staff members worked with the Autism Society to make sure they were portraying autism correctly. Bongiorno said he kept returning to Haddon’s novel to “really get a grip on who Christopher is as a person.”
Bongiorno is the youngest member of the cast of 11, and he said that his original fears that the show would be uncomfortable were quelled by everyone’s kindness.
“It was also nice for me to see all these talented people in their element,” Bongiorno said of his castmates. “I learned a lot from just watching them act.”
The production team obviously put a great deal of thought into the technical aspects of this show in order to fully do the story justice.
The 11 actors play a huge number of roles, often changing costumes onstage or observing scenes from places just outside the light.
The set is relatively simple, with lighting and projections playing the main role in the visual complexity of the show.
The projections are meant to be the world through Christopher’s eyes and alternate between patterns or simple backgrounds and an overwhelming blur of images. The lighting complements the projections to enhance the effect.
The sound design works seamlessly with all the other technical aspects, fully transforming the theater into Christopher’s mind.
In short, the technical aspects of this show play a much larger role in developing the story and characters than many other productions.
“Curious Incident” is not only technically excellent, but is also incredibly thought-provoking and leaves the audience asking questions and lingering to discuss it.
The audience is challenged to learn more about people on the autism spectrum and how they interact with the world.
The show explores a vast range of themes, including the role of parents and teachers in the lives of those on the autism spectrum, the social stigma about autism and what is “normal” and the potential of those who perceive things differently to change the world.
“The Curious Incident of the Dog in the Night-Time” runs at 7:30 p.m. Friday and Saturday and Nov. 13-16 and at 2 p.m. Sunday and Nov. 17.
The Erie Playhouse is located at 13 W. 10th St. Student tickets are $15.

« Gannon hosts second annual Hackathon event Back on top: Knights soccer is in the Top 5 »