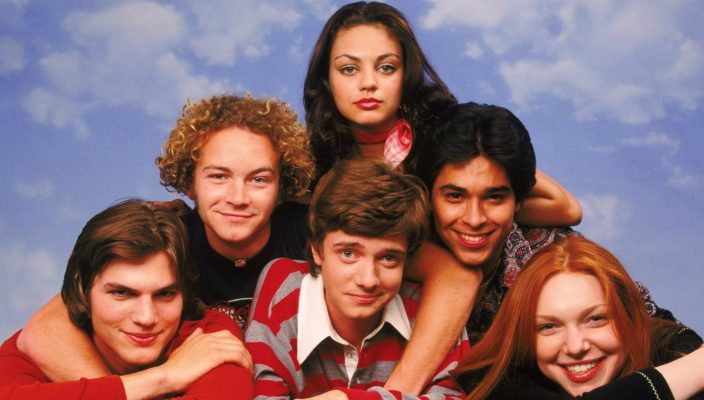 Hang out down the street with ‘That ‘70s Show’ on Netflix

As Erie weather finally begins to get colder and the days get darker, it is easy to find yourself getting bored. It seems like there is not much to do in November until Thanksgiving.
Halloween is over and Christmas is less than two months away; what do you do until then?
Lucky for this generation, Netflix has a plethora of shows one can binge.
What better way to enjoy the next few weeks than to get bundled up in blankets and watch a good show for hours on end? Yes, Netflix, I am STILL watching.
It seems that the essays, projects and exams can be never-ending. However, laughing for a few hours can help cheer up anyone who may be struggling with stress.
“That ‘70s Show” does a phenomenal job at taking your mind off things for a while.
Join Eric Forman (Topher Grace) and his group of friends as they live their teenage years in Point Place, Wis.
Starting to date, living through high school and experiencing life in the 1970s has never been more comical.
Eric’s group of friends consists of Steven Hyde (Danny Masterson), Michael Kelso (Ashton Kutcher) and Fez (Wilmer Valderrama).
Steven is the typical bad boy who loves rock music and believes that the government is out to get everyone.
Kelso is the one obsessed with his looks and getting girls.
As for Fez, not much is known about him besides the fact that he is a foreign exchange student.
Donna Pinciotti (Laura Prepon) is Eric’s longtime neighbor, and eventual girlfriend.
Lastly, there is Jackie Burkhart (Mila Kunis), a rich girl who is a year younger than everyone else and who dates Michael.
Although nobody in the group likes Jackie, who can be bossy, they learn to welcome her.
Jackie and Michael aren’t the best couple, but that is where the iconic line that the internet loves “Well damn, Jackie, I can’t control the weather” comes from.
Eric’s life is good for the most part with his friends always hanging out with him.
However, his home life can sometimes be stressful. Eric’s father, Red (Kurtwood Smith), is extremely strict. Red threatening to kick Eric’s butt and telling him to stop being an idiot, are just some of the iconic traits that he adds to the show.
Opposite of Red is Eric’s mother, Kitty (Debra Jo Rupp), who is the loving and caring mother figure to the group of friends.
Although there are other adults throughout the show, like Donna’s parents, these two are the most prominent through the entire series.
There are iconic elements to “That ‘70s Show” that are unique compared to any other sitcoms, like the colorful scene transitions that have the different characters usually dancing on a warped camera angle.
There is the “circle” which consists of the friend group’s interesting conversations while the camera is placed in the center of the circle to make transitioning from one character to the next easier and unique to the show.
One last element that is known throughout the series are the overdramatic dream sequences, where one of the characters narrates the situation, which results in a comedic experience for the viewer.
There are eight seasons of “That ‘70s Show,” with over 20 episodes in each season. The show itself has a timeline of three years from early 1976 to late 1979.
Even though there are over a hundred episodes to enjoy, “That ‘70s Show” is one that someone can watch repeatedly and not get sick of.
So, be prepared to get that annoying “are you still watching” and indulge in true comedy.
“That ‘70s Show” is available on Netflix.