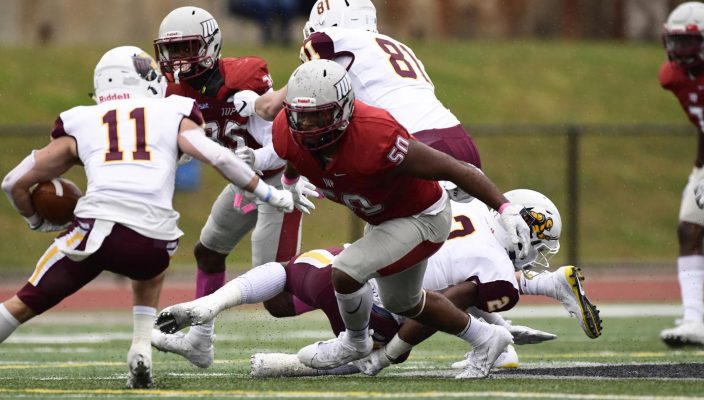 The Gannon University football team dropped its fourth straight game Saturday, 35-0, at No. 19 Indiana University of Pennsylvania in a Pennsylvania State Athletic Conference West matchup.
The loss left the Knights with an overall record of 2-6 and a 1-4 mark in PSAC play going into Saturday’s Battle for the Niagara Cup against crosstown rival Mercyhurst.
Kickoff is scheduled for noon at Saxon Stadium on the Mercyhurst campus.
In Saturday’s loss to IUP, the Knights dug themselves a hole early, allowing two quick scores that put the Crimson Hawks up 14-0 just six minutes into the game.
The initial score came on the first of Quinton Maxwell’s three touchdown passes, this one 7 yards to Duane Brown less than three minutes into the game. A 54-yard return on the game’s opening kickoff put the Crimson Hawks at the Gannon 46-yard line, and they needed just five plays to score from there.
The Knights’ offense could not get untracked on their first possession, losing six yards in three plays to force a punt. This time, IUP needed only four plays to score – a 28-yard touchdown pass from Maxwell to Qashah Carter that made it 14-0.
Gannon’s defense stepped up, forcing back-to-back punts from IUP before Jimmy Keefe was picked off by Damon Lloyd at the start of the second quarter, and he returned it 40 yards for the pick six to make it 21-0.
The Knights could not move the ball on their next possession, and Maxwell’s third touchdown pass of the day left the Knights’ deficit at 28-0.
Gannon was able to gather the offense and put together a 14-play, 61-yard drive right before half, but the offense stalled on the IUP 21-yard line where a pass to Joey Cox fell incomplete on fourth-and-2.
The Knights held the Hawks to seven points in the second half. Gannon made it nine straight games with a forced turnover thanks to a muffed punt recovered by Tyler Tiggs and a late interception by Chris Farnsworth.
Keefe had a rough day, completing only 7 of 27 passing attempts for 72 yards, and he was sacked three times. Gannon’s backfield rushed for 173 net yards led by Melvin Blanks’ 87 and Zevin Holley’s 83. Blanks averaged 6.2 yards per carry and Holley averaged 6.4 on his 13 carries.
Tre McNeill led the defense with six total tackles while Dorian Jones and Lawson Paden each contributed five. Malik Bridgeman had two tackles for loss.
This weekend, the Knights will look to break both their four-game losing streak and a three-game losing streak at the hands of rival Mercyhurst.
The Lakers bested Gannon 38-21 at last year’s matchup at McConnell Family Stadium. Mercyhurst has won six of the last seven meetings between the two teams.
The 3-5 Mercyhurst squad is coming off back-to-back losses.