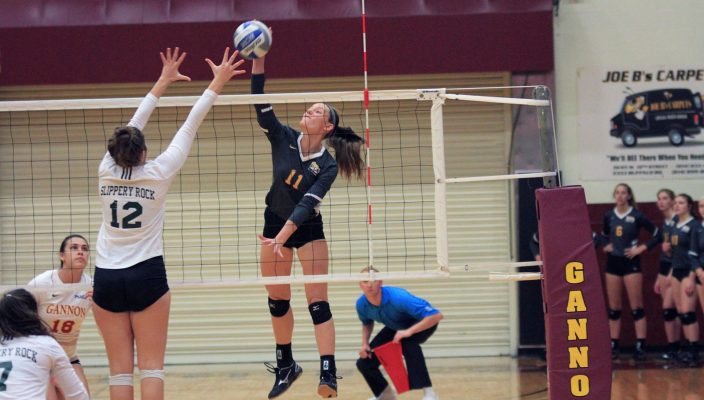 Gannon volleyball set for success with four wins in a row

The Gannon University women’s volleyball team improved its record to 19-5 after three straight sweeps against Mercyhurst, Slippery Rock and Findlay last week.
The Knights, who improved to 11-1 in Pennsylvania State Athletic Conference play, opened their most recent week of play by blanking rival Mercyhurst, 3-0, Thursday at the Hammermill Center.
Gannon then followed that with a 3-0 sweep of Slippery Rock on Friday at home before going on the road and sweeping Findlay, 3-0, Saturday in a nonconference match.
In the win over Mercyhurst, Gannon opened the first set with an 8-1 edge. The Knights then pushed their lead up to 15-8 and forced a Laker timeout. Gannon went on to win the opening frame, 25-13.
After exchanging points to open the second set, Mercyhurst pushed pack and created an 11-8 lead. Gannon rallied and gained a 16-13 lead after back-to-back kills from Ally Smith. The Knights then held off the Lakers to close out the second set, 25-20.
Mercyhurst battled back in the third set, which saw many ties and lead changes.
The Lakers jumped out to a 15-8 lead to force a Gannon timeout. Gannon rallied to capture the lead, 21-20, following a big kill from Smith. The Knights then closed the frame on a 4-2 run to seal the win, 25-23.
“It was a great atmosphere in the Hammermill Center for this rivalry match,” head coach Matt Darling said in a video posted by the Gannon Athletics Twitter page.
“The competition was good, the atmosphere was good, and the play overall by our team was pretty good.”
The Knights then battled Slippery Rock the next day, and they wasted little time taking control, jumping out to a 7-2 lead. Gannon expanded its lead to 20-11 and went on to take the frame, 25-15.
Ashley Beyers handed out 15 assists, while Smith totaled five kills in the set.
Slippery Rock fought back in the second frame with an early 6-3 edge. Gannon then came back to steal the lead, 9-7, after back-to-back kills from Lauren Sampson.
The Knights kept storming forward from there and went on to win the second set, 25-13.
Gannon continued to apply pressure into the third frame, creating a quick 9-7 lead. The Knights then stretched their lead to 18-11 and went on to win the set, 25-16.
“It was a good team win — it was the best example of the season so far with everyone on at the same time,” Darling said in a video posted by the Gannon Athletics Twitter page.
Gannon then traveled to Findlay, Ohio, to take on the Oilers Saturday.
The teams traded points in the opening set until Gannon rattled off three straight points to make the score 12-8. The Oilers fought back to lock the set, 19-19.
The Knights then took control, closing the frame with a strong 6-1 run to win the set, 25-20.
Gannon sprinted to a 7-1 edge in the second set, then expanded its lead to 19-12 after back-to-back kills by Ashley Kerestes. Gannon went on to take the second set, 25-19.
The Oilers didn’t give up in the third frame, creating a five-point advantage at 20-15.
Gannon then pushed back to pull within one, 23-22, after a kill from Smith. Gannon closed the set with a clutch 4-1 run to win the frame, 26-24.
This marked Gannon’s 12th sweep of the season, and the Knights will look to make it 13 when they host California University of Pennsylvania at 7 p.m. Thursday at the Hammermill Center.
Gannon will also be at home Saturday in a 7 p.m. match against Seton Hill on Senior Night/Alumni Night.