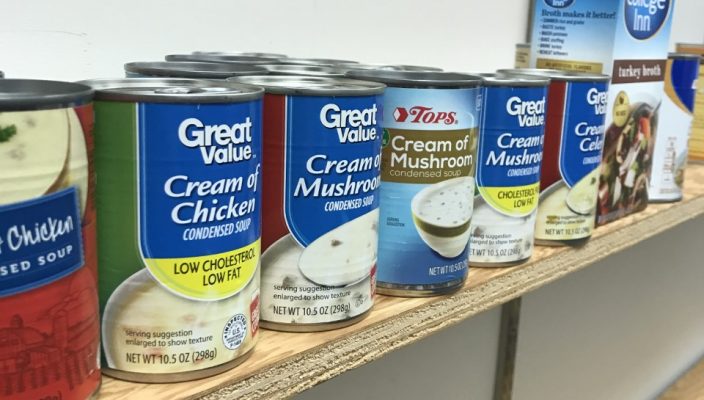 The New York Times recently released an article stating that nearly half of college students are going hungry due to the lack of money or resources to get groceries.
To combat this on a local level, Gannon University has implemented an on-campus service known as the U-Knighted Store.
What was once known as the first-generation food pantry, helping those students who were the first of their family to attend college, has now expanded to help all students. U-Knighted is a confidential service that provides free food to college students facing food insecurity.
Junior Macaila Hamman is in charge of U-Knighted and said the purpose of the store is to erase the shameful stigma behind asking for help and to instead welcome students to a place where they feel supported.
“We just want to be there for any student facing a food shortage whether they did not get their pay for that week yet, they did not get money from home or they just need food in general,” Hamman said.
The New York Times article mentioned that many factors can contribute to a food shortage, such as changes in national and state education funding, raised tuition and higher living expenses.
The U-Knighted Store used to be associated with the Second Harvest Food Bank, but the idea of a pantry seemed to scare away students, so they are no longer connected. All donations are given to the store by Gannon faculty or community members. Just last week, the Global Education Office was able to donate pop tarts for students to have breakfast.
Sydney Oyatta, a senior computer information systems major, said the worst part of his week last week was running out of meal swipes because he was not sure what he was going to do for food.
“Some people feel ashamed in asking for help, especially at an expensive university like Gannon,” Hamman said. “That is why we stress confidentiality so heavily.”
When students need food, they can contact Hamman at hamman001@knights.gannon.edu and she will set up a time for them to come in. The only information required is an email so the pantry can verify their status as a student.
Once verified, each student is treated specially and is given a little bag so they can shop as if they were at a normal grocery store.
Some of the items included are canned soup (chicken noodle, tomato, cream of chicken, cream of mushroom), canned veggies (corn, green beans, spinach and carrots), canned beans, cereal, snacks, ramen noodles, body wash and shampoo.
Hamman said they try to stick to “five-minute foods” that can be made easily between classes or in a rush.
U-Knighted is only two years old now, but it is looking to make big improvements already. Starting soon, they hope to have “Fresh Fridays” where they will partner with Metz Dining to serve a free, hot dinner to students in need of it.
They also are planning on doing a food drive at Saint Mary’s Home for Seniors downtown to increase donations.
Even when the food at U-Knighted expires, U-Knighted donates that food to the Mental Health Association downtown so that none of the food donated goes to waste.
To donate, contact Hamman at hamman001@knights.gannon.edu to set up a day and time to bring in donations.