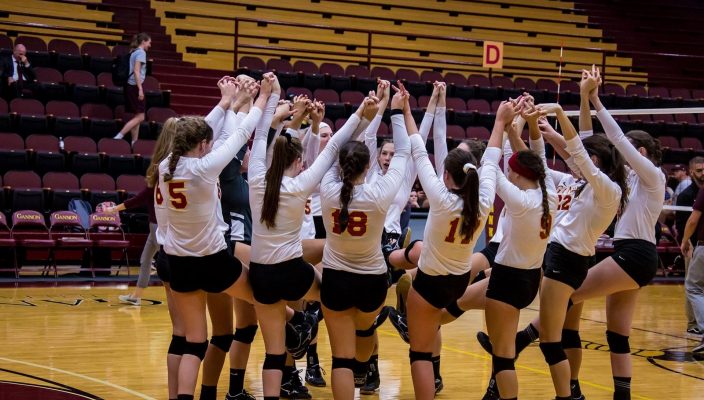 The Gannon University women’s volleyball team saw its 11-game winning streak come to a close Thursday in a 3-2 loss to Shepherd in Shepherdstown, W. Va.
The Knights rebounded to earn a split of their two road outings, though, as they came back to hand Shippensburg its first loss in Pennsylvania State Athletic Conference play, 3-0, Friday on the road.
The split left Gannon with an overall 16-5 record and a 9-1 mark in PSAC action going into Thursday’s 7 p.m. matchup with rival Mercyhurst at the Hammermill Center.
The Knights remain on top in the PSAC Northwest, as the second-place Lakers are tied for second at 5-4.
In the loss to Shepherd, the Rams’ jumped out to a quick 9-3 lead before stretching it to 18-9 in the opening set. After three straight kills, Gannon was able to cut the deficit down to six, 18-12.
But Shepherd’s big lead was too much to overcome as Gannon dropped the first set, 25-19.
Gannon pushed back in the second frame and gained an early 10-5 lead following an ace from Lauren Sampson. The Knights then expanded their lead to 16-8 after a missed serve and Sampson kill. Gannon went on to win the second set, 25-18.
The two teams went back and forth to open the third frame and found themselves tied, 7-7. Gannon then erupted for a 6-0 run featuring two big kills from Ashley McClung to put the Knights in front, 12-7. The Knights went on widen their lead and pick up the win, 25-15.
However, Gannon was not able to put the match away in the fourth set. The Rams’ fought back, taking a quick 10-6 lead. After a kill by Gannon, Shepherd rattled off four straight points to increase its lead to seven, 14-7, and went on to take the set, 25-12.
In the fifth frame, Gannon took an early 7-3 lead but could not close it out. Shepherd responded with a 4-1 run to lock the frame, 8-8. The Rams continued to apply pressure as they went on to close out the frame, 15-12, and take a 3-2 win in the match.
Ashley Kerestes posted 17 kills in the loss while Sampson added 14 and McClung finished with 12. Ashley Beyers contributed 46 assists.
“It’s a tough loss for us tonight, but Shepherd was simply better and played harder, with more desperation,” Gannon coach Matt Darling said in a comment posted on the Gannon Athletics website.
“I didn’t have us ready for that, unfortunately.”
The Knights were ready the following day, however, as they rebounded to beat Shippensburg.
Gannon wasted little time in jumping to a 10-5 lead in the opening set, then pushed the lead to seven at 17-10 following a kill from McClung. Gannon went on to take the opening frame, 25-17.
The Knights continued to apply pressure, opening up a 6-2 lead in the second set after a kill from Sampson. Gannon then increased its lead to double digits, 14-4, following blocks from Maggie Greenfield and McClung. The Knights won the second set, 25-13.
Shippensburg pushed back creating an early 7-3 edge in the third set. The Knights then went on a 6-0 run to capture the lead, 9-7. Gannon then began to pull away after an ace from Ally Smith. Gannon went on to close out and take the set, 25-18.
Smith led a balanced attack with 10 kills and three aces while Sampson and Kerestes each contributed eight kills.
Following Thursday’s game against Mercyhurst, the Knights will host Slippery Rock at 7 p.m. Friday at the Hammermill Center, and then travel to meet Findlay at 5 p.m. Saturday in a nonconference matchup.
And coming up Gannon will be facing California at 7 p.m. Thursday, Oct. 31. at the Hammermill Center.