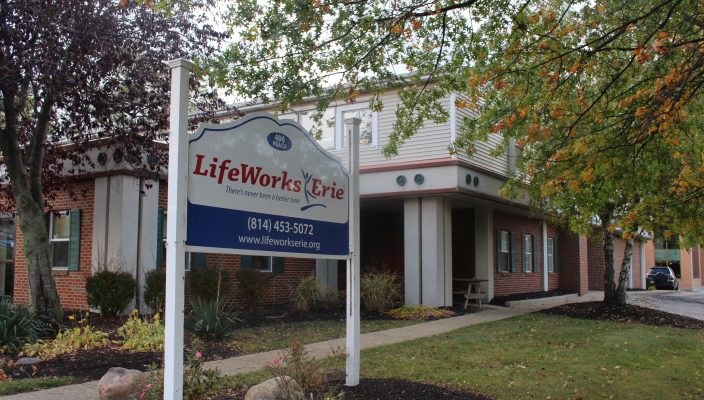 Gannon University added another building to its Erie campus recently. The university purchased the LECOM Health Center for Health and Aging building at Peach and West Fourth streets, across from the Recreation and Wellness Center and adjacent to North Hall.
The center, which was previously known as LifeWorks, will be moved to a different location in Erie. LECOM declined to tell the Erie Times-News the exact location of the new center, saying that additional details will be forthcoming.
According to Doug Oathout, Gannon’s chief marketing and communications officer, the university learned that the building was for sale around the beginning of 2019. LECOM approached Gannon, knowing that the university would be interested because of the building’s proximity to campus.
Negotiations took a few months, with the university settling the deal and purchasing it for $750,000 around April or May.
“The negotiations were described to me as being very amicable,” Oathout said. “And, as it happened, we discovered the natural gas leak under the Mary, Seat of Wisdom Chapel, which is just a strange coincidence.”
As part of the deal, LECOM asked to remain in the building for another six months. This made it so that Gannon is set to take over the building in November.
Gannon’s finance and human resources departments will be housed in the building, Oathout said. Currently, the finance department is split between the third floor of Palumbo Academic Center and Zurn Science Center, and HR is in the basement of Palumbo.
The departments are expected to move into the building around the end of the spring 2020 semester.
Gannon isn’t expecting the building to need many renovations, Oathout said.

However, there will be a period of about five or six months between when Gannon takes over the building and when the departments move in.
“The big deal is that we’ll be entering budget season in November,” Oathout said. “It’s a very busy season for the finance department, so it would be like trying to move during finals week. We’re to try to time this so that it doesn’t disrupt a critical time.”
Oathout said that the consolidation of the departments into one building will help them run more efficiently. This, he says, helps in tasks being accomplished quickly and employees being able to collaborate.
“You need to talk to your co-workers and hand stuff off,” Oathout said. “It’s always easier when they’re a few steps away rather than floors or buildings.”
Students had mixed reactions to the news of the center being purchased by Gannon.
David Thompson, a sophomore criminal justice major, said he felt it was good for Gannon, but feels more can be done.
“It’ll be good for Gannon as they expand campus, and increase their footprint in the downtown area” Thompson said. “However, I think they should also look into revamping freshman housing around campus since places like Finegan are considered outdated.”
Nikki Johnson, a senior advertising and communication major, was all in favor of the news.
“I think that would be great for our community to be able to expand more,” Johnson said.