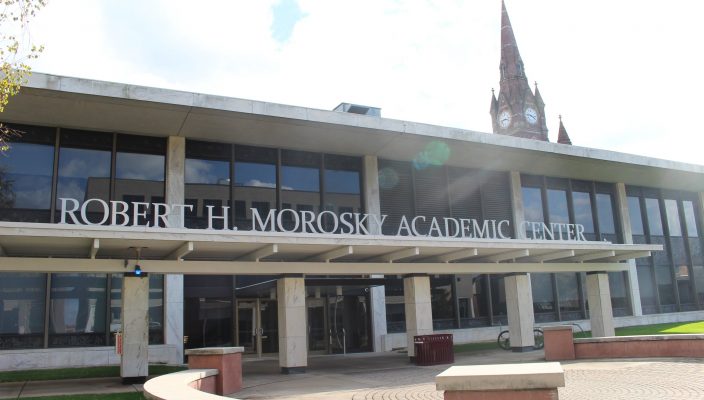 Gannon University’s Morosky College of Health Professions and Sciences is facing some major program restructuring throughout the next three years. The restructuring will result in five schools created and organized under the Morosky name.
Under this plan, five schools will be formed under the Morosky College. These will include the School of Medical Sciences, containing physician assistant science, radiologic sciences and respiratory care; the School of Rehabilitative Sciences, which will incorporate occupational therapy, physical therapy, speech language pathology and athletic training; and the Villa Maria School of Nursing, home to Gannon’s nursing program.
There will also be the School of Public Health and Health Sciences, consisting of public health, health science, sport and exercise science, medical laboratory science and nutrition and human performance. The final addition is the School of Sciences, which will include biology, freshwater and marine biology, chemistry, math physics, science, biochemistry and any pre-health program advising.
Each school with be led by an associate dean working in conjunction with Sarah Ewing, Ph.D., the dean of the Morosky College.
Only one new employee will be hired, and he or she will serve as the School of Public Health and Health Sciences’ associate dean.
Changes will also be seen on the Ruskin campus. The same restructuring will happen there, and the programs will fall under the Erie-based associate deans. An associate dean, though, will be located on the Ruskin campus to oversee everything.
This division was inspired by the evolving medical field and is intended to benefit students by moving with the workforce.

The Morosky College is the largest at the university with over 2,000 students and 160 faculty and staff across both of Gannon’s campuses. Dividing the college into separate schools is intended to represent their dedication to these programs and their continued growth.
Taylor Roberts, a junior biology major in the LECOM 3+3 program, said one thing she really likes about the divide is that it is all about evolving the program.
“I like that the school I’m going to is evolving with the workforce,” Roberts said. “It’s the key to success with the students.”
She said she sees it as only beneficial, and Caleb Mandel, a freshman physician assistant major, agrees with her.
“It seems like a really good idea from what I gained from it,” Mandel said. “It sounds exciting.”
On the other hand, sophomore nursing major Julia Tush said she is not too concerned about the changes. As a nursing student, her program was already a little separate, under the Villa Maria School of Nursing.
Still, she said she’s happy to remain under the Villa Maria name, even if the school of nursing was already established.
“It’s good to have a prestigious name attached to us,” Tush said. “It’s a name people from this area know.”
What all three students did agree on though, was that they hadn’t heard anything about the restructuring going on in their programs. Though the deadline for the restructuring to be finished isn’t for a few years, few – if any – students in the Morosky College are aware of the changes being made.
Once students do learn about the restructuring, they often have many questions, especially about how they’ll be more directly affected.
“Because my program is LECOM early admission, will my curriculum change?” Roberts asked without an answer.
Kevin Richards, a junior occupational therapy major, thinks this is a good course of action for Gannon.
“I feel this is a good move for the university since the health profession does have the biggest growth as far as demand and availability,” Richards said.
“The health profession is important in today’s climate with new epidemics arising and the ever-evolving medicine being discovered. Gannon is well-known for the health sciences so putting Morosky at the front is a wise decision.”
Brady Bizon, a physician assistant major, said he’s a fan of this organization plan.
“This will benefit health students,” he said.