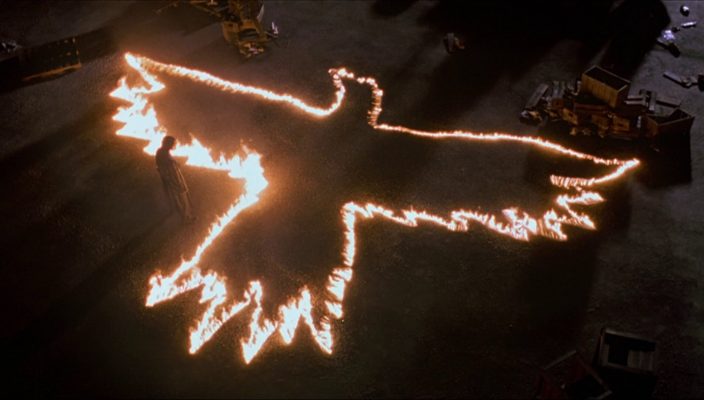 “People once believed that when someone dies a crow carries their soul to the land of the dead. But sometimes, something so bad happens that a terrible sadness is carried with it and the soul can’t rest. Then sometimes, just sometimes the crow can bring that soul back to put the wrong things right.”
Oct. 30 is right around the corner. For most people it is a time of fun, excitement, buying candy, finishing up costumes and going to parties.
However, not all events are joyous and fun for the spooky holiday. The 1994 action film “The Crow” follows a heartbreaking story on the Eve of Halloween. Young lovers Eric Draven and Shelly Webster are set to have their wedding the next day. Unfortunately, that wedding never comes.
A group of men are known for causing mass destruction and chaos around town on what they call “Devil’s Night.” Notorious for setting hundreds of buildings on fire, stealing and killing, these men set out to mess with the wrong couple.
To put things simply, Shelly is abused and tortured by these group of men who had broken into her apartment.
Eric tries to stop the men but is outnumbered and killed. Shelly is rushed to the hospital, where she suffers in immense pain for 30 hours before dying. A gruesome and disturbing story that should be over, right?
Wrong. The film then takes a huge jump to the following year, where most of the plot takes place.
Eric returns from the grave, thanks to his crow that holds his soul. His mission is to avenge his fiancée’s death by eliminating everyone responsible for her suffering.
Slowly targeting members one by one, Eric recalls the events that happened the previous year. With rage and heartbreak, he is not able to rest until he gets justice.
“The Crow” is truly a sad story. It is filled with harsh parts that may not be suitable for some audiences, taking caution with drug and rape references, hence the R rating.
However, it does have some comedy sprinkled throughout. Eric’s mannerisms and jokes on how he handles situation are truly humorous. Even the facial expressions he has while he is fighting off the bad guys are enjoyable.
It is a dark sense of humor due to the situation at hand, but it is great, nevertheless. In addition to being filled with action, the movie has a sweet romance to it. It is warming to see how much Eric loved Shelly, that he would do anything for her.
Eric is played by the son of Bruce Lee, Brandon Lee. Unfortunately, this is the last film Brandon ever did.
During filming and toward the end of the project, a blank round in one of the guns happened to backfire, shooting him. He later died during surgery.
The film is dedicated to Brandon and his real-life fiancée. Fortunately, with the use of editing and his stunt double, the film was able to be finished. As a result, the film was nominated for different awards and won a few of them.
With the film’s backstory being as sad as the story on the screen, there are some good things that come from this film.
A notable quote that Lee said during the film was “it can’t rain all the time.” Things will get better, no matter the situation at hand.
Personally, I think many can take some great lessons and messages from this movie and put it toward their life. “The Crow” is now available for streaming on Netflix.