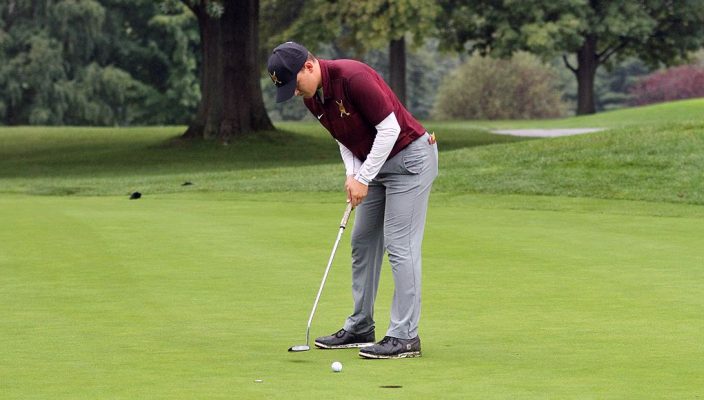 The Gannon University men’s golf team placed first in the Howard “Bud” Elwell Invitational, which concluded Monday at Whispering Woods Golf Club.
Ethan Bennett, a junior from Stoney Creek, Ontario, shot a 71-73-144 to help the Knights win the two-day event with a team total of 305-304-609.
Gannon easily topped runner-up Mercyhurst, which held a two-stroke lead after Sunday’s opening round before ballooning to a 321 on the final day for a 624 total.
John Carroll finished third at 312-316-628, followed by Gannon’s “B” team at 348-336-684.
Bennett earned his first win of the season and finished inside the top five for the second time with his season-low two-round score of 144.
Other top scorers for Gannon were Jacob Mertz, who finished tied for fourth at 76-76-152, Connor Bennink (sixth, 78-78-156), Abe Holmes (tied for seventh, 80-77-157) and Clayton Skoff (tied for 13th, 81-83-164).
Mertz finished inside the top five for the second time this season. It’s also his second consecutive week with a top-five finish.
The Knights have finished in the top five in each event this season, including three first-place finishes.
Gannon will return to action Friday at the Pennsylvania State Athletic Conference Championships in Hershey.
The tournament will go until Sunday and be played at the Hershey Country Club.
Last season, Gannon finished in the top five with a fourth-place finish.
While the men were playing close to home over the weekend, the women’s team enjoyed the weekend off. The Knights’ most recent outing came at the William Beall Fall Classic at Findlay Country Club in Findlay, Ohio, Oct. 7-8.
There, Gannon placed 15th overall as a team, with Rebecca Red Horse, of Mesa, Ariz., being Gannon’s top finisher in 19th place with a three-round total of 75-82-75-232.
Red Horse moved up 11 spots from being tied for 30th after day one.
Gannon’s other contributors include Maria Arenas, who tied for 38th at 77-89-83-240, Carley Sawyer (T-77th, 82-88-90-260), Samantha Gaffney (86th, 89-82-95-266) and Alyssa Drehs, who only scored in the first two rounds with an 86-81-167.
On day one of the tournament, the teams played 36 holes and completed the final 18 on the second day.
The Knights have played in the William Beall Fall Classic the last six seasons and took a 13th-place finish last season.
The women’s team also will compete in this weekend’s PSAC Championships in Hershey.