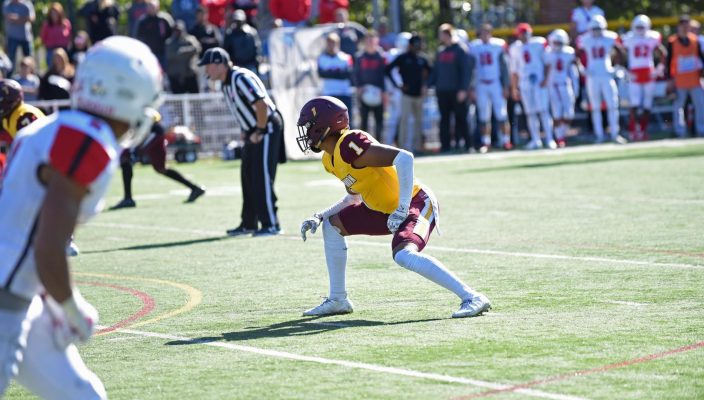 Seton Hill converted a safety and a touchdown pass – all in the final 48 seconds of play – to claim a wild 25-21 victory over Gannon Saturday at Offut Field in Greensburg.
The last-minute loss left the Knights with a 2-4 overall record and a 1-2 mark in Pennsylvania State Athletic Conference West action.
Gannon will look to snap its two-game losing streak at noon Saturday when California University of Pennsylvania visits McConnell Family Stadium.
The Knights have lost their last two games by a combined five points, as they fell to Edinboro, 18-17, at home on Oct. 5.
Against Seton Hill, the Knights trailed by three with 10 minutes remaining in the fourth quarter. Quarterback Jimmy Keefe led the Gannon offense downfield for a score to take a 21-17 lead after Johnny Freeman hauled in the 17-yard touchdown catch.
The Griffins were able to work the ball into the red zone their next possession but were stopped on downs at the 3-yard line.
A one-yard loss put the ball at the Gannon 2 before Seton Hill’s Justin Griffin and Jayden Emberton-Gaines combined to bring down Gannon’s Carlos Gomez in the end zone for a safety, cutting Gannon’s lead to 21-19.
Gannon gave possession back to Seton Hill at midfield with 47 seconds remaining. Three quick completions moved the Griffins to the Gannon 17, and one play later, Ryan Barabe connected with Matthew Williams for the touchdown reception and a 25-21 lead with 17 seconds remaining.
The Knights’ last possession started at their own 31-yard line. Two long completions to Sam East and Freeman put the ball at the Griffins’ 12-yard line, but time expired before the Knights could run another play.
The first half saw back-and-forth scoring action, setting the score at 14-14 after two quarters. Joey Cox picked up his fifth touchdown reception of the season on a 14-yard pass from Keefe.
Cox, a senior, moved into the top 10 all-time Gannon receptions list with 80 and added 25 yards rushing in three carries – the top rushing mark on the day for the Knights.
Keefe also moved into the top four all time in Gannon touchdown passes with 27.
Junior safety Tre McNeill picked up a career-high 15 tackles. Emberton-Gaines collected 13 total tackles to lead the Griffins defense.
Keefe reached an even 300 yards passing, completing 21-of-30 attempts to go along with his three touchdowns. Barabe went 20 for 25 for 250 yards and three touchdowns for Seton Hill.
Freeman, Gannon’s freshman wide receiver, hauled in five receptions for 95 yards and a touchdown.
Following Saturday’s home matchup with California (Pa.), the Knights will travel to meet Indiana University of Pennsylvania on Oct. 26 before heading crosstown to take on rival Mercyhurst at noon Saturday, Nov. 2.