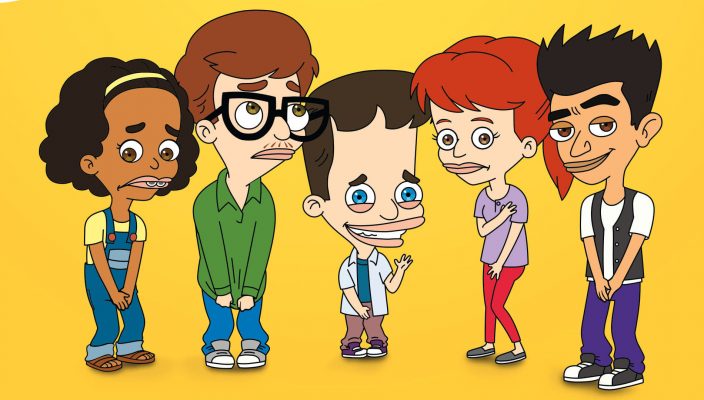 Autumn is upon us. The weather is getting crisper and colder. What better way to destress and unwind than to lie in a warm bed and start binge watching a new series?
As many students have probably done over fall break, starting a new show can be relaxing and enjoyable.
Although fall break is over, it is not too late to start a new show. Netflix original “Big Mouth” is a great show to turn on if you need a pick-me-up.
With the third season now streaming on Netflix and having a total of 31 episodes, “Big Mouth” is a quick show to catch up on.
“Big Mouth” is based on the middle school years of producers Nick Kroll and Andrew Goldberg. Middle school was an awkward time for everybody, especially early and late bloomers.
Puberty can drive almost everyone insane; anger, depression, growth, strange new hormones and feelings all work together to make this time especially difficult.
However, this adult animated sitcom can make such an awkward part of life a fun and entertaining one.
Andrew, voiced by comedian John Mulaney, is an early bloomer. His hormone monster, Maurice, is always by his side contributing to how he feels and reacts.
Maurice, voiced by Nick Kroll, happens to contribute to many of Andrew’s conflicts throughout the series due to his uncontrollable emotions.
Unlike Andrew, for most of the series Nick, also voiced by Kroll, does not have a hormone monster and is embarrassed for being a late bloomer compared to his best friend. This situation has caused turmoil for the two friends, but they learn to accept their differences for the most part.
Besides the two protagonists, there are other characters in this iconic cartoon. Jessi, voiced by Jessi Klein, is a girl going through somewhat relatable family issues. As a result, the show depicts her rebellious phase. Jay, voiced by Jason Mantzoukas, is a rough boy with aggressive older brothers, who happens to be curious and confused about his sexuality.
The last relevant middle schooler, Missy, voiced by Jenny Slate, is a nerd who tries to learn how to love herself for who she is.
There are many adults throughout the show; however, one of the most recurring adults is the sex-ed and gym teacher, Coach Steve, who is again voiced by Kroll.
Coach Steve, who seems to be uneducated about a lot of what is he supposed to teach, tries his best to teach his students about sexual education.
However, his stupidity with the simple things is extremely humorous to most audiences.
There is one more character who shows up a lot, Connie, voiced by Maya Rudolph. Connie is a hormone monstress and belongs to Jessi for most of the series. Much like Maurice, Connie is like a guardian angel for the seventh graders.
The humor for this adult sitcom is like that of “The Simpsons,” “Family Guy,” and “American Dad.”
However, “Big Mouth” does not focus on politics or current events. The animation style also differs greatly from those of other well-known cartoons. The humor can be uncomfortable for some people, but for the most part it is understandable and enjoyable.
Next time you’re on break, or have a moment to spare, click on “Big Mouth” for endless laughs. Enjoy binging the show, and like me you’ll be anticipating the next season. “Big Mouth” is now available for streaming on Netflix.