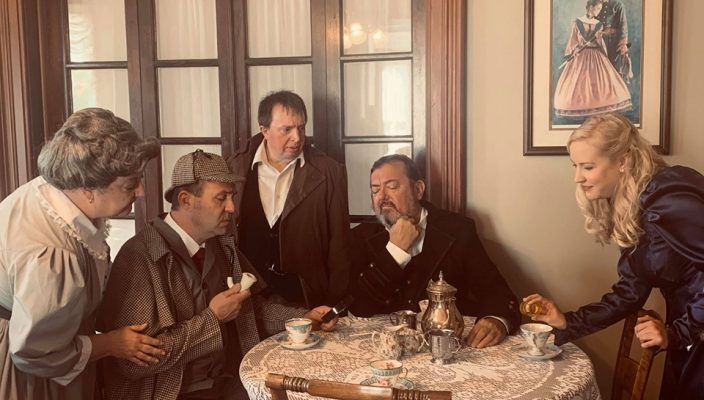 Get out your magnifying glass and pull on your trench coat – Sherlock Holmes and friends have arrived at All An Act Theater.
“Sherlock’s Last Case” features the eponymous detective and other beloved characters, including his sidekick Dr. John Watson and their trusty housekeeper Mrs. Hudson, but be warned: this is definitely not your father’s Sherlock Holmes.
Written by Charles Marowicz, the play picks up where Arthur Conan Doyle’s famous book series ends before sharply veering away from its source material.
The book series ends with the death of Holmes’ archnemesis, Professor Moriarty.
The play opens with Holmes and Watson lounging in their flat and wondering what to do with themselves now that the most prolific troublemaker in London is no longer at large.
Of course, things don’t stay quiet for long at 221B Baker St.
An unexpected guest, claiming to be the daughter of the late Professor Moriarty, pays a visit bearing some grisly news.
Liza Moriarty, played by Marie Glaser, informs Holmes that her brother, Simean Moriarty, is planning to avenge their father’s death.
Not surprisingly, Holmes is at the top of Simean’s hit list.
Liza pleads with Holmes to either leave town or meet with Simean in person to talk him down and avert the crisis.
Liza is as persuasive as she is beautiful, and Holmes agrees to meet with Simean.
Mysterious hijinks ensue and Holmes eventually finds himself imprisoned in a dark, damp cellar at the mercy of another …
The play mixes both humor and suspense, pulling audience members along by their lapels and leading them to a stunning final reveal that will catch everyone by breath-stopping surprise.
Jawn Gross plays a convincing Holmes, complete with British accent, impeccable wit and snobbish attitude.
Larry Lewis is a formidable co-star as the amiable and bumbling Watson, who may have more turmoil boiling under the surface than he lets on.
Glaser is inveigling as the beautiful and talented Liza Moriarty.
Sue Hansen gets the audience howling as Mrs. Hudson, the loyal housekeeper with a flair for the dramatic.
Wayne Gardner rounds out the cast as the hilariously clueless Inspector Lestrade.
The show flourishes under the creative direction of David W. Mitchell, who balances the comedy, tragedy and thrills this play brings to the stage.
In addition to the talented actors and director, the set construction is also top-notch.
To maximize the use of All An Act’s 29-by-18-foot stage, the construction crew was challenged to create a 360 -degree rotating stage.
The impressive set, coupled with the props and costume design, magically transport the audience to 19th-century London.
“Sherlock’s Last Case” has three final showings at 7:30 p.m. Friday and Saturday and 3 p.m. Sunday.
All An Act Theater is located at 652 W. 17th St., between Cherry and Poplar streets.
Tickets are $12 for adults and $10 for students and those age 55 and up.
For more details, call 814-450-8553 or 814-449-6554 or visit www.allanact.net.