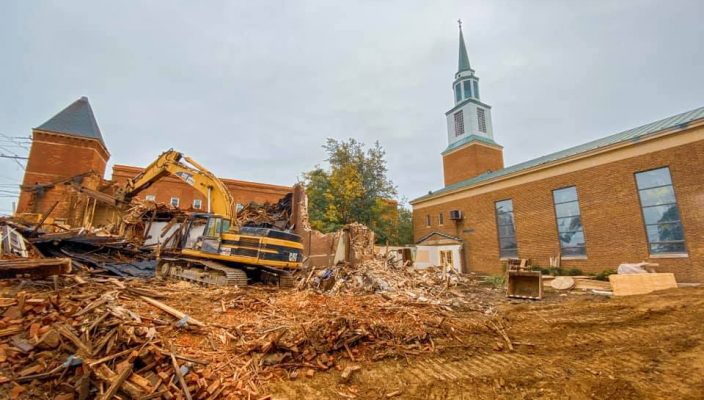 With a gas well leak discovered under Gannon University’s Mary, Seat of Wisdom Chapel, renovations are swiftly underway in a $1.25 million project.
As of Oct. 8, the buildings surrounding Gannon’s chapel — the student services building and the pontifical center — were taken down to provide better access to the gas well located beneath the chapel, Doug Oathout, Gannon’s chief marketing and communications officer, said. The north wall of the chapel was also taken down, being careful to leave the rest of the chapel intact.
The next step will be to fill and cap the gas well with pounds of concrete. This will be done with a drill driving into the side of the chapel where the concrete will be poured. The rubble from the buildings will also need to be cleared. Oathout said he expects this step to take anywhere from one to six weeks.
Once the well is fully capped and sealed, the focus will switch to renovating and repairing the chapel. Before the leak was discovered in June, no renovations were planned, Oathout said.
“I don’t think we had renovations planned, but if we’re going to put the wall back up, we saw the opportunity to do it,” Oathout said.
Everything being done needed to be done eventually. Now, a timeline is set, Brent Heckman, director of Campus Ministry and the resident minister of North Hall, said.
The chapel had water damage and needed a new roof and floor. Beyond this, though, no official designs are set yet. They are being worked out though. A meeting between Brian Nichols, the vice president of Student Development and Engagement, Almitra Clerkin, associate vice president of University Advancement and the Rev. Michael Kesicki, associate vice president of university Mission and Ministry, to work on setting the plans out and determining a timeline.
Once the timeline is determined for the renovations, funding will be better determined. For this, the $1.25 million project is expected to be covered through alumni donations, Clerkin said.
“We feel very confident in our ability to reach our needs since it identifies very closely with our identity as a university,” said Clerkin, a Gannon alumna herself.
Drawing on past experiences, former members of the Gannon community were happy to help with previous chapel renovations such as contributing to a new altar.
The chapel holds a close place in many people’s hearts. Christenings, weddings and funerals have happened there, Clerkin said. It has brought the university together in the past.
In the end, most of the changes to the chapel will come in the form of a facelift, Heckman said. New paint, new electrical and a new heating and cooling system will be added to the building. Better accommodations will also be added, including a new entrance on Peach Street to better meet the Americans with Disabilities Act. The first-floor bathrooms will also see similar improvements.
In the meantime, while Gannon is without a chapel, Thursday and Sunday Masses are being held in Room 219 of the Waldron Campus Center.
This has led to more set-up without a permanent space, Heckman said. He said the Waldron staff has been a great help with that, though.
Room 219 is also a more central location than the chapel was, so this has its own advantages.
“It makes it easier for people to get to and from,” Heckman said.
Not everyone agrees with this, though. James Slater, a fifth-year theology major, isn’t thrilled with the use of Room 219.
His main criticism comes from the change in atmosphere to Mass and that it feels more like a gathering than it should.
“To me, it just doesn’t feel like Mass,” Slater said. “There’s something to be said for the atmosphere surrounding a product and the actual physical environmental it resides in.”
However, Slater said he is excited for what the future holds regarding the chapel.
“While I’ll be disappointed I won’t be able to see them take place in full or finished, I’m very excited for the renovations,” Slater said.
The chapel’s anticipated completion date is spring of 2020.