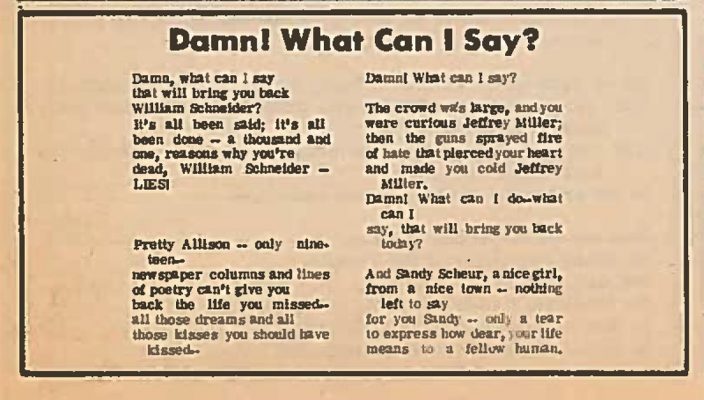 Imagine sitting in a classroom as the clock ticks by, then a thud sounds in the hallway. Another follows. People scream. Gunshots echo down the corridor and ensues panic in the students in surrounding classrooms.
Socks become tourniquet, jacket sleeves double as ties for the door, scissors become a method of defense and a skateboard is just a way to break through a window and escape.
Although scary, this is a reality for survivors of a school shooting.
The Sandy Hook Promise organization released a video last week featuring back-to-school essentials used as ways to survive a school shooting. This video caused lots of conversation surrounding the issue of safety in schools and how students can prepare for those circumstances.
“At this rate it can happen anywhere at any time and unfortunately you can never be too prepared in today’s day and age,” said Alexa Harding, a sophomore education major. “I feel like no matter how much planning and preparation, you can never fully prepare yourself for how you will react in that moment if it were to happen to you.”
Harding said as an education student, she hopes to see stricter screenings on those who purchase a gun so that this occurrence does not continue.
Other students were shocked by the Sandy Hook video and felt ill-prepared in the case that a school shooting were to occur.
“After watching the Sandy Hook Promise video, I was very shocked and saddened,” said Petra Shearer, a junior English and theater performance major. “I became more upset and uncomfortable as the video became more violent and real.”
Shearer said if faced with a school shooting at Gannon, she would not know the safety procedures.
Harding also said that was not aware of what to do in that situation.
Les Fetterman, director of Police and Safety, said there are security measures in place to prevent active shooters from getting into classrooms. These measures include a protective film on classroom door windows so the glass cannot be easily broken out to unlock the door.
Located within each room is a small flipchart with a condensed version of the emergency response manual.
There are 550 cameras on Gannon’s campus along with 24/7 officer supervision.
Officers and dispatchers receive training in this area to be able to respond in a timely and effective manner. Faculty are also shown presentations to help prepare them for any situation that may arise.
Gannon uses the run, hide, fight instructions during a violent intruder circumstance.
“Do not think of doing these in any certain order,” Fetterman said. “The situation will dictate what you do. If you can safely get out, do it and run to cover. Lockdown and hide when you do not know where the intruder is — (remember intruders can carry different types of weapons) — and fight when confronted with an armed intruder when there is nowhere to run or hide, and they are intent on inflicting imminent harm.”
If students would have to evacuate, the emergency response manual says to move quickly and quietly, remain calm, leave belongings behind, keep hands free and visible for responding police and follow instructions of first responders.
During a lockdown, the best option is to find a locked and secure area, use furniture to block the door, stay out of view, silence cell phones, close blinds and turn out lights and do not open the door until instructed by police.
If it comes down to fighting, assume the intentions are lethal, spread out if in a group, throw things to make it more difficult for the attacker and do whatever it takes to survive.
These instructions may turn into more of a fight or flight instinct at the moment, so Fetterman reminds students of critical takeaways: always be aware of your surroundings, take note of emergency exits, do anything to disrupt the intruder and most of all, listen to faculty and staff who have specialized training.
Fetterman also emphasized that if a student feels threatened, there is a behavioral intervention team that offers a form online where anyone in the Gannon community can submit concerns. There is an Active Intruder video students can watch, in addition to downloading the LiveSafe app and finding the Police and Safety instructions under “University Resources” on the my.gannon homepage that Gannon students can readily access.
Gannon’s designated emergency phone number is 814-871-7777, but if the situation is immediate, calling 911 may be faster.