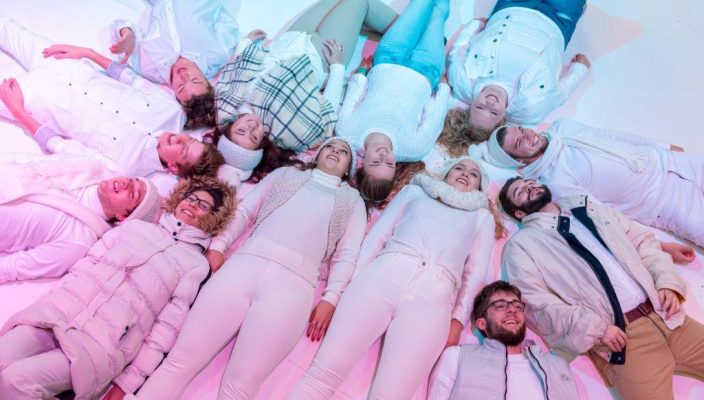 Schuster Theatre’s “Almost, Maine” opened Thursday night to a full house.
The play, written by John Cariani and directed by Alaina Manchester, is a series of short vignettes, each featuring a couple going through a change in their relationship on the same cold, magical night.
Propelled by the energy of the aurora borealis, strangers become friends, friends become lovers and lovers become strangers in scenes that are alternately hilarious, hopeful and poignant.
The set design, complete with towering plywood pine trees, live evergreens, fake snow and cool lighting, perfectly captures the scene of a small northern town in the heart of winter.
The play opens with a rush of delightful chaos as actors stream onto the stage and begin weaving in and out of one another, occasionally stopping in unison to toss up a handful of fake snow and cheer in delight.
Actors are clad in white from head to toe, bundled up in puffy vests, earmuffs and fur-lined boots. Under their white ensemble, red hearts occasionally glow.
In the midst of the chaos, actors begin to find and connect with their scene partner, waving at each other from across the stage as their hearts light up in sync.
The play was written with the intent for doubling, so 7 of the 11 cast members appear in two different scenes as separate characters.
Gabe Gallagher, a freshman with an undeclared major, makes his Schuster Theatre debut as the adorably naïve Steve in the vignette “This Hurts.”
Steve’s innocence is on a fundamental level; afflicted with congenital analgesia, he is unable to feel pain, so he has resorted to keeping a notebook filled with things that can hurt him.
He is sitting in his apartment building’s laundry room when Marvalyn, portrayed by Rebecca Ropelewski, unintentionally whacks him in the head with her ironing board in an impressive feat of stage combat.
“I did a lot of musicals in high school, but getting hit with an ironing board on stage was definitely a new thing for me,” Gallagher said.
Marvalyn’s curiosity is piqued when Steve stands up unscathed, and the rest of their scene delves into the different types of pain humans can experience and what it means to let someone close enough to hurt us.
“There’s a lot of intimacy in this show, but we did so much training and bonding as a cast that it became second nature on stage,” said Gallagher. “Overall, [the play] has been a huge time commitment, but worth every second!”
Another scene, starring Kyle Peck and Regan von Richter, involves a disgruntled woman returning all the love her boyfriend ever gave her (literally – she stuffs it all in her car and drops it off at his house).
Yet another scene features two friends, played by Justin Karns and Mike McGhen, woefully sharing their hilarious girl troubles and realizing they may be — again, literally — falling for each other.
Each scene is brought to life by a talented pair of actors and interwoven with touches of magical realism.
“Almost, Maine” will be staged at 8 p.m. Thursday through Saturday and at 2 p.m. Sunday.
Tickets are $5 for faculty, staff and students and can be purchased at the box office or reserved online at gannon.edu/schustertheatre.