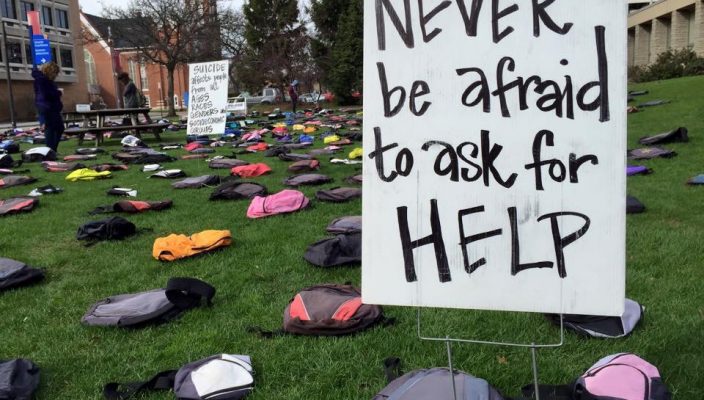 Active Minds is working to change the conversation about mental health on college campuses across the country, and Gannon University’s chapter of this national organization is no exception.
Its active member base can be seen tabling with information in the Waldron Campus Center, gathering groups of students for suicide remembrance walks and hosting large-scale events.
One such event, called Send Silence Packing, will be taking place Thursday.
Send Silence Packing is a traveling educational exhibit that aims to raise awareness about mental health, connect people to resources and inspire action for suicide prevention.
First unveiled in 2008 at the National Mall in Washington, D.C., the exhibit has reached nearly one million people at more than 200 stops across the country.
Here at Gannon, volunteers will be rising bright and early Thursday to help unload and set up the display.
From 9 a.m. to 4 p.m., over 1,000 backpacks will be strewn across Friendship Green and AJ’s way, with Nash Library as the rain location.
Each backpack donated is in memory of a loved one who died by suicide while in college.
Students are encouraged to spend some time walking through the display and reading the personal testimonies of family and friends who have lost a loved one.
Sara Tagget donated a backpack after tragically losing her daughter Katrina, a student at Michigan State University.
“We decorated a backpack in Katrina’s memory on the one-year anniversary of her death, and it has been part of the Send Silence Packing tour ever since,” Tagget wrote in a press release for the exhibit.
“I wish I had better understood Katrina’s pain when she was alive. But hopefully what I do now in memory of her and others who died by suicide will save lives.”
The sobering number of backpacks, each representing a person and a story, speaks to the prevalence of suicide among college students.
Sadly, it is the second leading cause of death among this age group, but mental health professionals emphasize that this need not continue to be the case.
Jodi Giacomelli, Ph.D., LPC, is one of the three counselors in Gannon’s Health and Counseling Center.
“When a mental illness, like depression, is treated, suicide is prevented,” Giacomelli said.
“There is no more shame in a diagnosis of depression [or other mental illness] than there is in a diagnosis of asthma.”
Counselors, Active Minds members and student volunteers will be available at the event to answer questions, provide support and connect students to resources.
“We hope this event will prompt students to check in with themselves and their friends,” Active Minds said in a statement.
“Seeking help when struggling is so important.”
If you are in crisis, there are lifelines available to you.
For 24/7 immediate support, call the National Suicide Prevention Lifeline at 1-800-273-TALK (8255) or contact the Crisis Text Line by texting TALK to 741741.
For support in daily life, lean on the people around you.
If you live on campus, reach out to your resident assistant. Talk to your professors. Be open and honest with your friends and family.
These people are not a substitute for professional counseling, but they are some of your biggest supporters.
Finally, Gannon’s Health and Counseling Center, located beneath Harborview on West Sixth Street, can be reached by phone at 814-871-7622.
Additionally, walk-in hours for initial consultations are held every Monday, Wednesday and Friday 9 a.m. to noon and 1 to 3 p.m., no appointment needed.
Giacomelli summed up the event simply and eloquently in a final comment: “The goal of Send Silence Packing is to reduce the number of backpacks in the display.”
Stop by on Thursday to show your support, learn about suicide prevention and find a place of community. Remember, you are needed here.