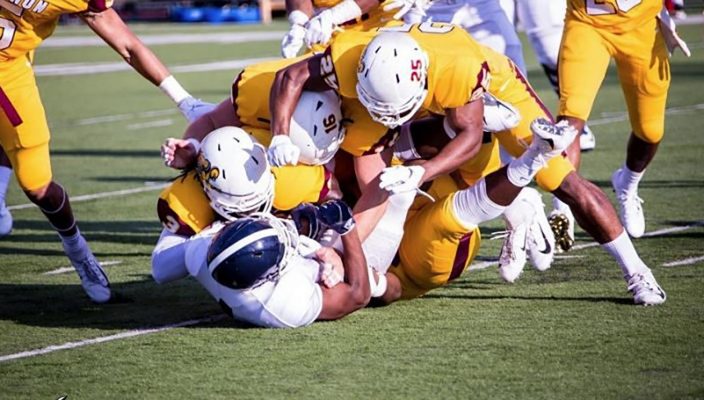 Football opens season with a win

The Gannon University football team earned a season-opening win through a strong defensive outing, hanging on for a 14-7 victory over Southern Connecticut State in New Haven, Conn., Thursday night.
The host Owls threatened several times in the first half, reaching the Knights’ 1-yard line at one point, but Gannon was able to go into halftime locked in a 0-0 tie.
The Knights finally broke the scoring drought in the third quarter as they found the end zone on back-to-back drives.
Quarterback Jimmy Keefe connected with Melvin Blanks for a 32-yard touchdown in the third quarter to open the scoring.
The Knights’ Keith Thompson then picked off Owls quarterback Matt Sanzaro for the second time, this one at the SCSU 41 to set up the next Gannon drive. Keefe used his arm again, this time finding Joey Cox for a 7-yard touchdown.
SCSU’s Sanzaro ran the ball in from 1-yard out after a 39-yard completion to Izaiah Sanders for SCSU’s first points.
The Owls’ touchdown came in a four-play drive with just under 10 minutes left in the game to close in on the Gannon lead, 14-7.
On its next drive SCSU worked the ball down to the Gannon 27-yard line with nine minutes to play. But A.J. Satcher bailed the Knights out with an interception and 33-yard return to the Gannon 45.
Satcher wound up being named defensive player of the week for the Pennsylvania State Athletic Conference West division, as he finished with seven tackles and three pass breakups to go with his interception.
The Owls’ final drive began with 5½ minutes remaining on the clock on their own 15-yard line.
A long drive put the ball on the Gannon 6-yard line with six seconds to go. Sanzaro tried a pass to Sanders as time expired but fell incomplete with Satcher in coverage.
Gannon gained 198 total yards of offense to the Owls’ 322. The Knights also committed 10 penalties for 104 yards to SCSU’s seven for 54.
SCSU entered the red zone five times but only scored on one trip. A failed 28-yard field goal attempt and three turnovers on downs ended SCSU possessions deep in Gannon territory.
Keefe completed 11 of 27 attempts for 130 yards and two touchdowns. The sophomore quarterback also gained 44 yards on 11 rushing attempts.
Cox corralled eight receptions for 87 yards to go with his touchdown.
SCSU’s Sanzaro completed 16 of 36 for 156 yards and three interceptions. He rushed for the team’s only touchdown.
The Knights sacked Sanzaro twice on the night thanks to Jeremy Mensah and Jay Bullock. Aaron Webb backed up Satcher’s seven tackles with six of his own.
The Knights will make their home debut at noon Saturday at McConnell Family Stadium against defending PSAC champion West Chester.