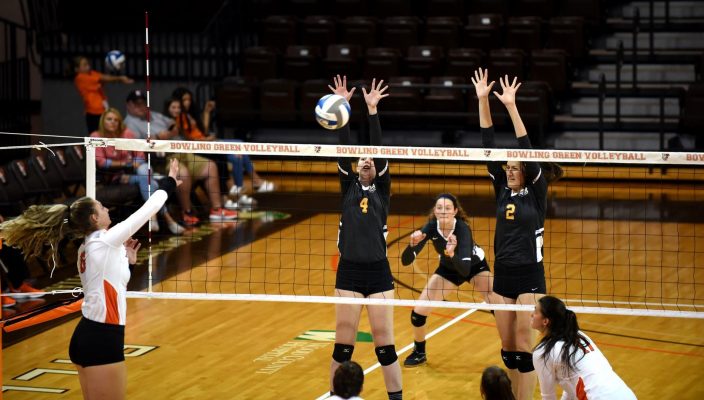 The Gannon University women’s volleyball team broke even in its first tournament of the season over the weekend, going 2-2 at the Ferris State Invitational.
Both of the Knights’ losses came in five sets, and in both losses – to McKendree and Ferris State — the Knights held leads in the fifth and deciding game before falling.
Gannon coach Matt Darling liked the fact that his team played hard throughout the weekend.
“We played at a high level against Ferris State, albeit in a loss, and then we managed to outlast Ohio Dominican, and any success we had was mainly due to how hard we played,” Darling said in a statement on the university’s athletics website.
“That being said, we have to face the reality that we blew two big leads in fifth sets this weekend, so obviously we need more than effort if we’re going to be successful in what we’re trying to do.”
The Knights opened the regular season Friday against McKendree with a 25-23 loss in the first set but came back to win sets two and three, 25-20 and 25-21, respectively.
However, the team fell short in the last two sets, losing 26-24 and 15-11. Ally Smith and Ashley McClung both turned in strong performances for Gannon.
Smith had 18 kills and eight digs while McClung had 17 kills and five blocks.
Later that day, Gannon came back with a dominant win against New Haven University, sweeping the Chargers in three sets, 25-18, 25-18 and 25-22.
Gannon dominated in this match, getting 72 digs compared to New Haven’s 51. The Knights also dominated the match in kills with 45 to New Haven’s 25.
Ally Smith continued with her impressive day as she achieved a team-leading 12 kills.
Maggie Greenfield and Ashley Kerestes each added six kills and Ashley Beyers contributed 28 assists.
On Saturday, the team started out playing 12th-ranked Ferris State and came away with a hard-fought five-set loss, 25-20, 22-25, 25-20, 21-25 and 17-15.
The Knights led 8-3 midway through the fifth set; however, five straight points brought the Bulldogs back into the game.
Gannon had trouble stopping Ferris State’s outside hitter Allyson Cappel as she had 13 kills, four aces and two blocks in the match.
McClung paced Gannon with 14 kills while Kristin Schorr added 13 and Smith 12. Beyers checked in with 43 assists in the loss.
In the Knights’ final match, they faced off with Ohio Dominican University and posted a dominant 3-1 win.
Gannon played a strong first set, winning 25-15, but dropped the second set, 25-20.
The Knights came back strong as they took sets three and four, 25-16 and 25-13.
The team established a strong block throughout, obtaining 12 blocks and combining for 41 kills.
McClung and Schorr each finished with nine kills and Smith contributed eight. Kerestes and Aubree Lanman each had five blocks in the win.
The Knights’ next matches are scheduled for Friday and Saturday in Indianapolis in the UIndy Invitational.
Gannon will play Illinois-Springfield and Indianapolis Friday before meeting Minnesota State-Moorhead and Northern Michigan on Saturday.