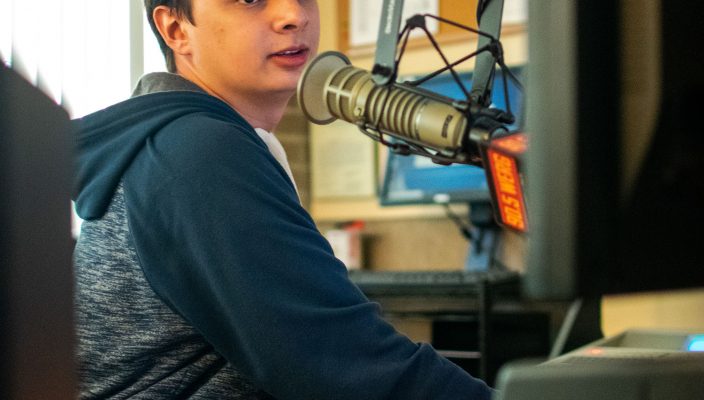 WERG becomes an affiliate with NBCNewsRadio

Listeners of Gannon University’s student-produced radio station, 90.5 WERG, may notice a change in broadcasting this semester. The award-winning radio station WERG, NBC NewsRadio and Erie News Now are now affiliates.
The partnership officially started on July 1, ending the station’s search for a well-known media outlet that would benefit listeners and students. To operations manager Chet LaPrice, NBC NewsRadio looked like the perfect fit for the variety of programs it provides.
LaPrice and the staff at WERG reached out to NBC to start the process of becoming affiliated with the company. After that, LaPrice said, the effort to put together the pieces became mutual. It took about a year to put everything together and finalize the affiliation.
“We negotiated on fees, what services would be provided and how the content would be delivered to us for airplay,” LaPrice said.
WERG has always operated under a two-part mission. The first part of the mission is to provide professional radio service to Gannon University and the greater Erie community. The second part is to provide news service to students as a unique, practical learning laboratory. Being partnered with NBC allows the station to fulfill both roles of its mission.
“For nearly a century, the NBC brand has provided a credible source of news and information,” LaPrice said. “We can offer that service to our listeners, as well as incorporate its usage into our journalism curriculum.”
Listeners can expect an increase in quality and quantity of news reports, Brian Bowersox, the station general manager, said. In the past, the news was slightly outdated because the staff recorded news reports for the afternoon in the morning. Now, the NBC affiliation allows the station to keep the news up to date down to the minute.
According to LaPrice, WERG will still be consistent with playing the best rock on the radio so that listeners can rely on that amid the other changes. What appears to be transforming the most is the news aspect of the station. Along with being timelier, news shared at the top of the hour will now be supplemented with updates in the morning and afternoon voiced by Mark Soliday and Amanda Post, anchors for Erie News Now.
The affiliation will also benefit students who work for the station. They will be required to compile, edit and produce the national news segments they receive. Which, according to LaPrice, will allow them to work alongside professional journalists in a practical learning environment. This way, they will be able to add a strong qualification to their portfolio upon graduation.
“Having a newswire allows students to have a professional sound when they report the news, rather than having to gather their own sources,” Bowersox said.
Students who work for WERG are typically responsible for selecting, editing and delivering timely and relevant stories. They’re also held accountable for delivering those stories in a professional manner aligned with the way news is produced in the industry. In the past, students from WERG have been regularly recognized on a national stage for their skills in content creation and technology integration, LaPrice said. The affiliation with NBC news will only help them refine and polish those skills, so they are set to work in the journalism world after graduation.