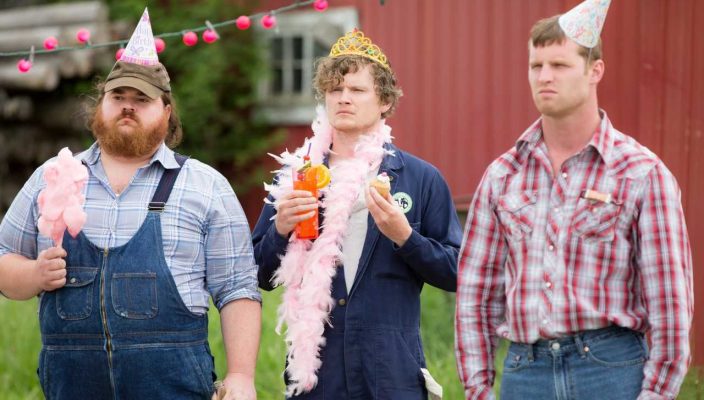 The first time you watch “Letterkenny,” you’ll be scratching your head at most of the dialogue.
But if you think something is a sexual innuendo, you’re probably right.
Letterkenny is a fictional town in rural Ontario where adult siblings Wayne and Katy run a produce stand.
Sounds innocent enough, right?
The bucolic setting, complete with barns, hay and horses, is hilariously contrasted with the wild antics of its 5,000 inhabitants.
The populace is divided into “hicks, skids, and hockey players” who are typically at odds with another.
Each group has a colorful arsenal of slang that takes some time to pick up but is extremely fun to employ in daily conversations with your roommates once you’ve all mastered it.
The hicks wax poetic on their days of “hooverin’ schneef” (snorting cocaine) and chide one another to “pitter patter” (hurry along) and “get to chorin’” while the adorably boneheaded hockey players are consumed by “crushin’ sandos” after “pracky” and “dibsin’ digis” of the most attractive female spectators.
The “skids” (meth dealers) have a whole library of arcane references, many of them surprisingly philosophical.
Hilarity ensues in both the absurd and the mundane.
One of the skids planning to throw a drug-fueled rave in the dusty agricultural hall is just as funny as the main characters sitting on the front porch shooting the breeze.
Recurring jokes are a staple in the series.
They never seem to wear out, and they ripen with age like a fine cheese.
Somehow, the joke about a neighbor who (allegedly) had improper relations with an ostrich strikes the funny bone every single time it’s delivered.
The rapid-fire witty dialogue is comedic gold, but the likable characters are what really make the show special.
From stoic “toughest guy in Letterkenny” Wayne to flamboyant Pastor Glen, you will grow to love them all.
The show is irreverent, smart and, most importantly, hilarious.
Hulu has purchased the rights to the series and the platform offers six sidesplitting seasons for your viewing pleasure, with the seventh season set to be released in October.
So, what are you waiting fer?
Pitter patter, let’s get ‘at her!