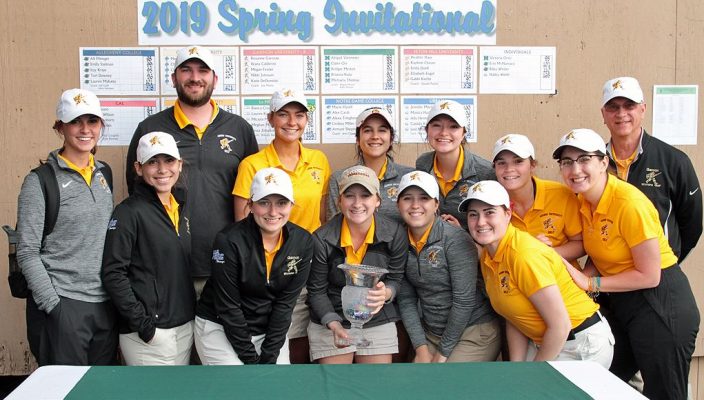 The Gannon University women’s golf team is revving up for a spectacular season this fall.
Last year, the team had a great season, as the Knights finished in the top four eight times in 10 tournament outings, going 34-5-1 against teams in the Pennsylvania State Athletic Conference.
Gannon’s singular tournament victory came at the Mercyhurst Spring Invitational late last season, which was soon followed by a second-place finish at the Gannon Spring Invitational to close the year.
Guiding the team again is Scott Stano, who was awarded coach of the year honors twice in three seasons.
Stano knows what it takes to win. He has led the Knight women to victory in all four of his previous years as coach.
Stano is excited for his fifth season, as this is the deepest team that he’s had, with a roster full of players eager to do their best.
“We have six seniors this year and a bunch of underclassmen hungry to crack the starting lineup
“We should be ready to pick up right where we left off.”
Returning seniors include Ileana Calderon-Martell, Megan Fessler, Samantha Gaffney, Nikki Johnson, Rebecca Red Horse and Carley Sawyer.
Stano noted that along with the depth of the team, all of the golfers are skilled enough to carry each other in the tournaments, which is an important key to winning games.
“Anyone in our starting lineup can be the low scorer for the team, which is great,” he said. “We do not have to depend on one player to carry the team. We have a group that can carry each other.”
The team has been practicing to prepare them for the tough season. Over the last week, practices have been at the range and have focused on weaknesses, as the players will not have time to fine-tune things during tournament play.
Apart from some struggles, the team has a key strength, which is mental attitude.
Stano compares his team to PGA golfer Brooks Koepka, explaining how one can never tell if he is doing well or poorly in a match, because he is “unflappable.”
“That is the same attitude our team has,” Stano said. “Everyone has a mistake on a hole, and we do a great job of quickly forgetting about the mistakes, while moving onto the next shot.”
With this attitude, the team may accomplish its goal of winning the PSAC this year. The current seniors got a taste of winning in their freshman year and are eager to repeat that feat. From there, qualifying for the NCAA regionals at Panther Creek is next on the list.
Gannon’s first match is at the Evann Parker Memorial tournament, which will be held Friday and Saturday at the Lake View Country Club in North East.
BRITTANY METZLER
metzler004@knights.gannon.edu