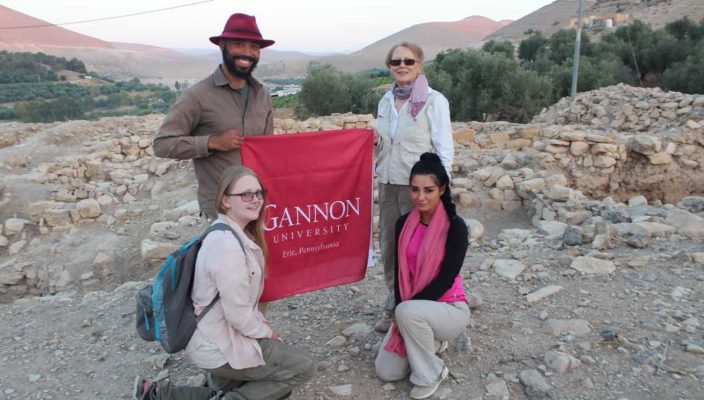 Students dig into the Jordan culture

This summer, a group of three Gannon University students and history professor Suzanne Richard went on an archaeological trip to Khirbat Iskander, Jordan.
The group, consisting of Calley Palicia, Michael Stewart and Jasna Dedic, were there for 4 1/2 weeks, stretching from June 5 to July 11. The students began their days at 5 a.m. at the dig site, working six days a week, leaving Sundays off. At the site, they would dig three to four inches at a time, working from the known to the unknown, said Palicia, a junior history major.
The heat was their biggest struggle as it climbed to over 100 degrees. Richard, who has a doctorate in near eastern studies, said that during the dig, people would have to come up from their digging areas for air-breaks, giving them a chance to breathe and cool off.
Fighting the heat, the group would leave the site around noon and return to their hotel, Palicia said. After a two-hour rest period — where most of the group napped — they returned to work.
Once they left the dig site at around noon, group members met up in the hotel’s conference room where they would log, register and put in the computer what they found at the dig site.
Aside from all the work, group members found themselves immersed in the culture, seeing the city and enjoying all it had to offer.
During the trip, Palicia said she enjoyed learning the Arabic words as she worked with the Jordanians.
Beyond the culture of the area, the group that the Gannon contingent worked with was incredibly diverse, Richard said. In the group that was digging at the site, there were French, Italian and British working alongside the Gannon students.
“It’s an opportunity for leadership and growth,” said Richard.
She said that it is great for the Gannon mission to make students global citizens. During this trip, they were placed in a different society.
Palicia said that was what she was most worried about before she left. There is a large negative perception of the Middle East in America. When she told people she was going, they said they would worry about her safety.
When that happened, she would say Jordan is safe and pretty neutral in the Arab world.
“Try to get past the negative views we have of the Middle East and see that it’s not so bad,” said Palicia.
Since the trip, Palicia said she is more inclined to travel to places she wouldn’t have before.
“The trip definitely made me more open-minded,” said Palicia.
Experiences like Palicia’s and many others’ have been happening for years.
Richard began working at Gannon in the fall of 1999. Since then, she has led a dig to Khirbat Iskander every three years.
Khirbat Iskander is an Early Bronze Age site, said Richard, the time when villages began developing into cities before returning to a more rural or nomadic lifestyle. This site, though, works to disprove that.
Digging there “has revolutionized our theories about what has happened to these people when their cities were destroyed,” said Richard.
Not only is Khirbat Iskander one of the most important Early Bronze Age archaeology site, it is also a site close to Richard’s heart. She went there years ago, when she started leading the digs and stayed there.
Until the next dig, there are many artifacts that need to be sorted, recorded and cataloged in the archaeology lab in the Palumbo Academic Center.