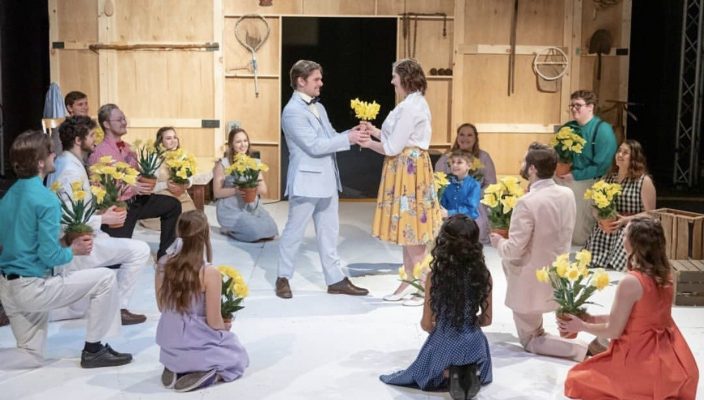 Schuster Theatre’s “Big Fish” is a whimsical story for the whole family.
The play, which opened last week, takes place in the state of Alabama.
Originally a novel by Daniel Wallace and later a film directed by Tim Burton, “Big Fish” hit stages for the first time in 2013.
The story revolves around traveling salesman Edward Bloom and the troubling relationship he has with his son, Will Bloom.
Throughout his whole life, Edward has told Will stories of witches, giants, mermaids and more.
Due to the lack of realism in any of his tales, Will grows to resent his father and moves away when he gets the chance.
Charlie Meyers, a junior healthcare management major, plays the role of Will Bloom.
“My character is constantly trying to reconnect with his father, Edward Bloom (played by Brian Bowersox), but doesn’t appreciate his father’s storytelling,” Meyers said.
Will and his fiancee, Josephine, return to Alabama to be married.
When he discovers his father is ill, Will starts to dig into his father’s past before he passes.
Along the way he discovers more about his father’s past than he expected to learn.
The show is directed by the Rev. Shawn Clerkin and his wife, Almi.
“Big Fish is a musical that truly highlights the idea of viewing life in an optimistic, adventurous perspective,” said Melina Walter, a freshman nursing major, who plays the head witch.
“Also, it makes you realize that the people you love will always be there for you and hold a place in your heart. This show has made me feel so many different emotions, and it was an adventure from the beginning. I am so happy I was able to work with such talented people.”
For those who have already seen the movie or have read the book, the musical offers a cheerier version for the audiences to enjoy.
Throughout the show, audiences could feel the connection between the actors as they put on a stunning production.
Although the production had the audience smiling, the ending made a few a little teary eyed, including the cast.
“The ending of ‘Big Fish’ is so emotional because you watch Edward’s life come to an end,” said Rebecca Ropelewski, a sophomore advertising, public relations and theatre major, who plays Josephine.
“It is a beautiful song.”
Catch “Big Fish” at 8 p.m. Thursday through Saturday before it swims out of the theatre for good.
“Come on out and, at the very least, watch the ladies of the show kill the witch’s number,” Meyers said.
“You will not regret it!”
Tickets are $5 for Gannon faculty, staff and students, and reservations can be made online at www.gannon.edu/schustertheatre.