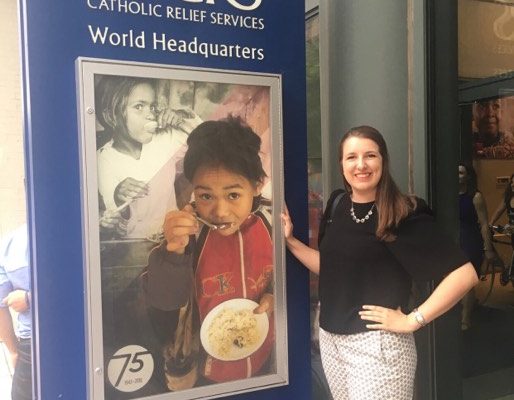 The organization Catholic Relief Services was founded in 1943 by the Catholic Bishops of the United States.
Although the organization was originally founded to serve World War II survivors in Europe, it was since expanded to reach more than 130 million people located in over 100 countries on five continents.
For the over 75 years it has been in existence, CRS has been on a mission to assist impoverished and disadvantaged populations overseas while spreading the spirit of Catholic social teaching to promote the sacredness of human life and dignity of the human person.
CRS’ services reach populations in need regardless of their race, religion or ethnicity.
Its mission statement, in short, is put in three simple words: faith, action, results.
CRS lays faith as its foundation, saying it has “faith in the people we serve and our shared ability to build a more just and peaceful world.”
The second piece, action, is embodied by the desire of CRS to more than just serve.
It wants to act collaboratively to bring about real improvement in peoples’ quality of life as well as bring genuine engagement through building peace and justice.
The final piece, results, says that the actions of CRS must be effective in alleviating human suffering.
The goal is to remove the root of the problem, not just the surface level problem, while empowering people to achieve their full potential.
Some of the current areas where CRS is reaching include Yemen, southern Africa, Venezuela, Central America, east Africa, Syria and Gaza.
Each area has a running emergency fund toward which donors can give.
The donations are then used for projects such as natural disaster relief, problems brought by violence and poverty such as lack of medical services and hunger emergencies, among other needs.
Although CRS works through adult volunteers and workers, it also partners with universities, including Gannon.
These partnerships allow universities and their students to assist in reaching the poverty-stricken areas that CRS delivers to.
Each on-campus chapter of student leaders is trained by CRS in order to better lead fellow students into the mission of global solidarity.
These chapters are then connected through different campuses and to CRS, building a national network and movement for impactful change.
As well, faculty can get involved through a “Faculty Learning Commons” program.
Involvement in CRS has also provided students with many opportunities in their futures including internships both in their Baltimore headquarters and overseas as well as scholarships.
The Gannon branch of Catholic Relief Services hosts events continually throughout the year that are aimed at bringing awareness to topics such as hunger, poverty and free trade.
Throughout the 2018-2019 school year the chapter hosted events such as Fair-Trade Coffeehouse and a Break Fast, its most recent event.
The Break Fast is hosted during Lent in which students can choose to donate meal swipes, fast for a day and then conclude the day with a free meal and a speaker.
The event is hosted yearly during the time of Lent and is open to all students.
Students interested in getting involved with CRS at Gannon can contact Emily Muntean at muntean001@gannon.edu for more information.