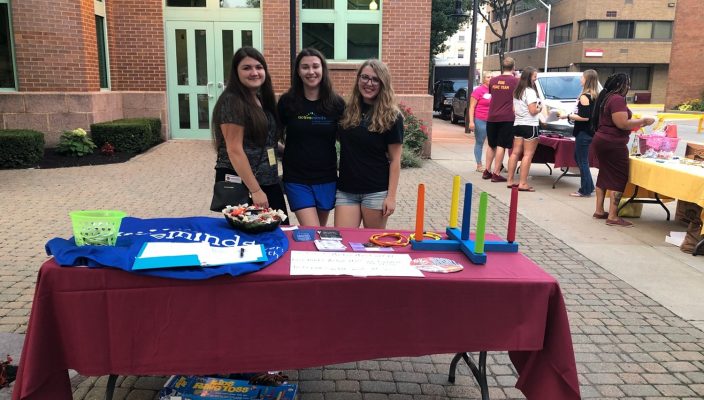 Although it is impossible to fit mental health into a box, summed up with charts, numbers and percentages, the statistics speak for themselves.
According to an article written by Chadron State College, 75 percent of lifetime cases of mental health conditions begin by age 24.
Additionally, one in four young adults between the ages of 18 and 24 have a diagnosable mental illness.
However, 40 percent of students with diagnosable mental health conditions did not seek help, citing concern of stigma as the No. 1 reason they did not seek help.
The organization Active Minds aims to change the conversation and remove the stigma behind mental health.
Active Minds is a national nonprofit mental health awareness organization.
It was founded in early 2000 by Alison Malmon, then a junior at the University of Pennsylvania, after her brother died by suicide.
Brian Malmon concealed his struggle with depression and psychosis for nearly three years before ending his own life.
As a result, Alison realized that something needed to change when it came to having conversations about mental health.
Thus was born Open Minds, later renamed Active Minds.
Although it started as a small organization on Penn’s campus, Active Minds now has over 450 campus chapters, including a chapter on the Gannon University campus.
The Gannon chapter of Active Minds aims to remove the stigma that surrounds mental health issues and create a comfortable environment for open conversation about mental health issues on campus.
They host events throughout the year to open the conversation and bring awareness to mental health.
Each year, the executive board and members of Active Minds are doing more and more to raise awareness of mental health.
The e-board annually attends and leads the Suicide Prevention and Awareness Walk in Cranberry, Pa.
Individuals attend the walk in order to honor the memory of loved ones who have died by suicide or to show their support.
The most recent event by active minds was “Outspoken,” hosted Friday at The Knight Club.
“‘Outspoken’ was born out of a desire to transform people’s perspectives on mental health here at Gannon,” said Kathryn Dickey, a sophomore social worker major.
“Our planning team wanted to elevate the voices of students on campus who struggle with their mental health, and really join in on the amazing work that Active Minds has already been doing. Thus, when we were looking for sponsors for this event, Active Minds was a perfect fit.
“Today, with our first open mic event in the rear view mirror, I can truly say that the planning process for this program was transformative for everyone involved, including myself, and I am so happy to have had the opportunity to lead this project.”
For the event, students could submit their stories and poems of mental health struggles anonymously.
The works were then performed by student volunteers from the Gannon community.
The event was powerful and helped bring a light to how many students on campus struggle with mental health, even if others don’t see it.
Students struggling with mental health issues, including suicidal ideations, can find help at the counseling center, or at the crisis hotline by calling 1-800-273-TALK, or texting TALK to 741741.
Mental health is health, and you are never alone.
Katie Hamilton
hamilton027@knights.gannon.edu