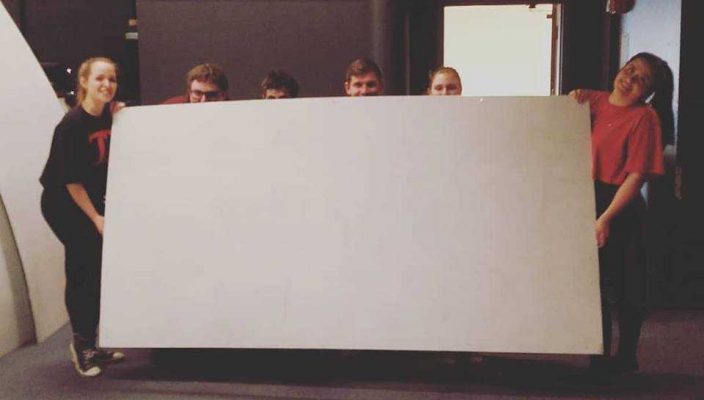 To close out the 2018-19 season, Gannon University’s Schuster Theatre will be running an imaginative, whimsical musical right in time for finals week.
“Big Fish” is based on the novel by Daniel Wallace and the film by the notably macabre director Tim Burton.
Gannon’s version, however, promises to be bright and cheerful, though not without some heartstring-tugging.
The story revolves around the unique relationship between parent and child.
Traveling salesman Edward Bloom has a dramatic flair and an affinity for hyperbole.
For decades, he has regaled his son, Will, with tales of mermaids, giants and other misfits.
Edward’s communication style is heavy on story, but often skimps on reality.
Now an adult preparing for his wedding day, Will wants to wade through his father’s stories to find the elements of truth behind them.
Ultimately, Will discovers a love that is more true than real.
The show is directed by the Rev. Shawn Clerkin and his wife Almi, and features three graduating seniors: Lauren Sovisky, Molly Cooke and Cheyenne Stefano.
Sovisky, a communication arts major, has been heavily involved with Schuster Theatre since her freshman year.
Though she has performed in a plethora of shows, “Big Fish” has quickly become one of her favorites.
“The story is so personal; you see these face-offs between Edward and his son, as well as these flashbacks to amazing and imaginative stories,” said Sovisky. “The audience will definitely feel a connection to the story, whether that means reminiscing over their own family relationships or thinking back to some of their own childhood tall tales.”
She also enjoys the upbeat dance numbers and beautiful songs, and would like to give a shout-out to the Clerkins for masterfully bringing a large play into such a small space.
Sovisky was recently hired as a digital media specialist and copywriter for Engel O’Neill, an advertising and public relations agency here in Erie.
Cooke, a dual theater communication and theater design major, is working hard behind the scenes to bring the show to life.
She will be designing and running the sound effects for the performance, as well as guiding a freshman through stage management.
Cooke came to Gannon with her heart set on entering the film or TV industry, but her experiences with Schuster Theatre have opened up new possibilities for her.
“Because of the faculty and the productions I was able to take part in, I’m now looking to get my master’s in technical theater. Cooke said, “I’d love to become a professor one day.”
Stefano will be pursuing a master’s in clinical mental health counseling with a focus in drama therapy at Antioch University in Seattle.
Catch “Big Fish” at 8 p.m. April 25-27 and May 2-4 and at 2 p.m. on April 28. Tickets are $5 for Gannon faculty, staff and students and reservations can be made online at www.gannon.edu/schustertheatre.