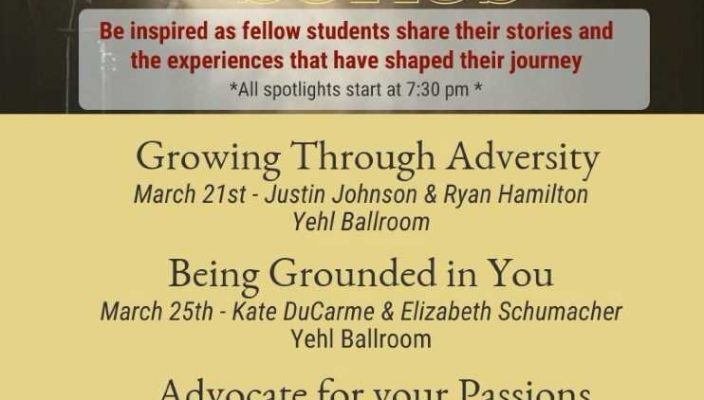 The second annual Student Spotlight series, sponsored by SGA, is in full swing. Eight students were selected to share their stories, TED Talk style, through the months of March and April.
Ryan Young, SGA’s vice president of Student Engagement, has been hard at work the past several months to ensure the talks come together and go off without a hitch.
He was responsible for reviewing applications and intentionally grouping pairs of student together based on common themes in their talks.
Familiar faces Ryan Hamilton and Justin Johnson kicked off the series on March 21. They spoke on the theme “Growing Through Adversity.”
Hamilton, a junior economics and finance double major, is a leader in a bevy of clubs and organizations across campus, in addition to being a friendly tour guide and resident assistant.
In his talk, he shared some tumultuous family history, then went on to discuss how his experiences have affected the way he sees and interacts with the world.
Despite, or perhaps because of, the difficulties he has faced, he tries every day to leave the world a little better than he found it.
“I’m just a person fighting the good fight,” he mentioned at the end of his talk, with his signature warm smile and shoulder shrug.
Johnson, a sophomore social work major, is also extremely involved on campus. He wanted to put aside the multitude of student leadership hats he wears and take a moment to be open and vulnerable.
“I did the Student Spotlight series to show that I am so much more than my [leadership] titles,” said Johnson. “I hope my talk encouraged people to be more vulnerable and see the value in their stories.”
Kate DuCarme and Elizabeth Schumacher swooped in the second week with the fitting theme “Being Grounded In You.” DuCarme, a junior physician assistant major, applied to give a Spotlight on a topic she is incredibly passionate about: self-worth.
She shared examples of when her own self-worth faltered, including her first gross anatomy exam grade and being waitlisted for Gannon’s PA program. (Spoiler alert: she’s here and thriving.)
With a calm confidence, she reminded listeners that their worth, as well as hers, is so much deeper than anything external.
“As college students yearning for independence and identity, it’s easy to latch onto achievements and others’ opinions,” DuCarme explained. “I hope the people who attended my Spotlight understand that their worth is inherent.”
Up next, Schumacher lit up the stage as she shared how cosplay has increased her sense of confidence. She encouraged listeners to find a hobby that brings them joy and that they can take pride in.
The last installment of the series will be at 7:30 p.m. Tuesday in Waldron 219.
Swing by to hear Sidney Oyatta and Sara Crandall speak on the theme “Putting Leadership Into Action.”
Applications for next year’s Student Spotlight series will open at the end of the fall semester.