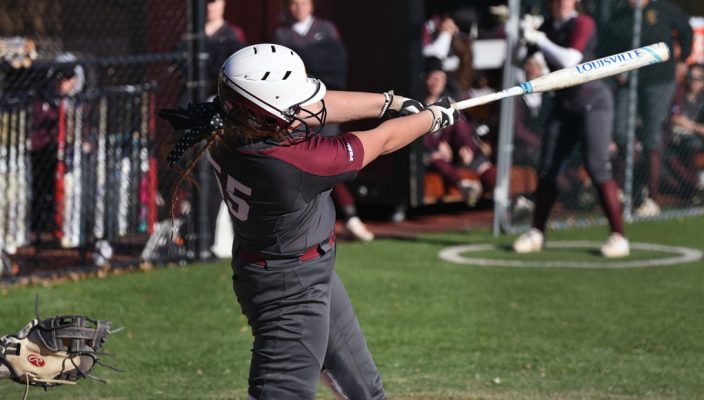 The Gannon University softball team saw its eight-game winning streak snapped by rival Mercyhurst, 8-2, Thursday, but the visiting Knights used the long ball to win the second game of the Pennsylvania State Athletic Conference doubleheader, 15-0, at Mercyhurst.
The Knights blasted eight home runs in the five-inning nightcap, tying the PSAC record for most home runs in a game.
Kaity Stocker led the assault, smashing three of the team’s eight home runs and driving in five runs.
The split, combined with Tuesday’s doubleheader loss to Seton Hill, 3-0 and 4-2, leaves the Knights with an overall record of 12-9 and a 1-3 PSAC mark going into Saturday’s 3 p.m. doubleheader against visiting Edinboro at McConnell Family Stadium.
In Thursday’s first game with Mercyhurst, the Lakers started with a two-run lead in the opening inning on a two-run homer, and they added another two-run bomb in the fourth inning to extend the lead to 4-0.
The Knights cut the lead to 4-2 in the sixth inning when Autumn Smith doubled to score Rachel Tanilli and Lisa Szajn. But the host Lakers put the game away with four runs in the bottom of the sixth inning on five hits and an error.
Gannon managed just five hits in the game and was outhit 13-5. Szajn, Tanilli, Smith, Ashley Bower and Taylor Wilp each had one hit in a losing cause.
Madi Beining went the distance and took the loss; all eight of the runs she allowed were earned. She did not walk a batter and struck out three.
Gannon bounced back in a big way in the nightcap, scoring five runs in the first inning, four runs in the second and five more in the third to put the game away.
Kristina DeMatteis started the scoring with a solo shot to left field in the first inning. Two batters later, Stocker extended Gannon’s lead to 3-0 with a two-run bomb to left, and Tanilli also had a two-run home run of her own later in the inning.
In the second inning, Szajn belted a three-run homer, her fifth home run of the season.
Stocker followed suit in the next at-bat with her second home run of the game, to stretch the lead to 9-0.
The Gannon home run derby continued in the third with a two-run shot from Sarah Ingerick and another solo home run from DeMatteis.
Stocker then came up for her third at-bat and crushed another two-run dinger, putting the score at 14-0.
To cap off the scoring, Nicole Bush hit an RBI double in the fourth inning that drove home Morgan Nyman.
In Tuesday’s doubleheader loss to Seton Hill, Gannon managed just nine hits in the two games combined.
Wilp had a pair of hits in the first game, which was scoreless until the Griffins scored three times in the top of the seventh.
Wilp and Kristina DeMatteis each had a hit and an RBI in the second game.
brittany metzler
metzler004@knights.gannon.edu