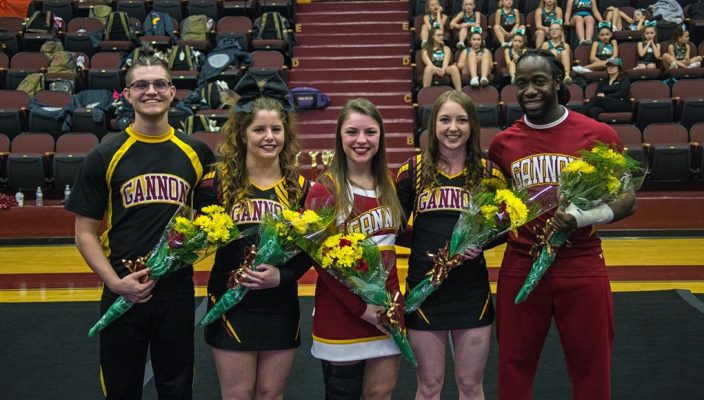 Competitive cheer moves on to Daytona

The Gannon University coed competitive cheer team compiled the highest score of any team as the hosts of the Road to Daytona Showcase, which took place Saturday at the Hammermill Center.
Participating in the event along with host Gannon were Mercyhurst, Buffalo State, Penn State Behrend, Elmira College and Rochester Institute of Technology.
The Knights started their routine with a near-perfect 9.97 in the 45-second game day.
They also scored a 4.83 out of 5 in jump difficulty and 4.7 out of 5 in toss difficulty to finish with 87.5 out of 100.
This score topped Rochester Institute of Technology in the small coed division.
The all-girl team boasted a 4.83 out of 5 in jump difficulty along with 4.5 out of 5 in toss difficulty and jump technique.
The all-girl squad also posted a 9.9 in the 45-second game day to finish with 84.9 out of 100. Elmira College barely topped the Knights by .3 in the all-girl division.
The Game Day team competed uncontested while posting 9.17 in use of props, 9.03 in fight song execution and 8.97 in band chant execution to receive 84.4 out of 100 overall.
The competitive dance team performed exhibitions in both the team performance and jazz categories. Gannon coach Meghan Foran said she was extremely pleased with the teams’ performances on Saturday.

“They have been working really hard all season and are putting the most difficult routines our program has ever competed on the mat,” she said. “We also added competitive dance this year, and they are competing in the Team Performance division and with our Game Day cheer team.

“We’re really excited to be entering these new divisions and have the opportunity to make a big impact in them.”

Foran said she was also very proud of the team’s fundraising efforts on Saturday, as the competition was a fundraiser for Make-A-Wish Foundation and also one of its Center for Organ Recovery & Education (CORE) special events. The team raised more than $1,300 at the door to donate to Make-A-Wish Foundation and more than $700 in its first ever “Make us Flip for Make-a-Wish” where participating athletes received pledge-style donations for completing skills at the event.

At the team’s CORE table, volunteers provided information and education about organ recovery and donation, and also registered organ donors.

“Make-a-Wish and CORE are two organizations that are really close to our hearts as a program,” Foran said, “and it felt great to be able to support them with the help of our family, friends and spectators on Saturday.”
The Knights will be competing in Daytona Beach, Fla., for the NCA and NDA Collegiate Cheer and Dance Championships April 4-5.
Last year, Gannon’s all-girl and co-ed teams reached the championship finals with the best preliminary finishes in program history.
The co-ed team placed fourth nationally in the Small Co-Ed Division II with a score of 91.30.
The all-girl squad wound up fifth in the Intermediate All-Girl Division II with a 91.90 mark.
It marked the third time the Knights had reached the finals in the all-girl squad’s four-year history.
KEEFER GREGOIRE
gregoire001@knights.gannon.edu