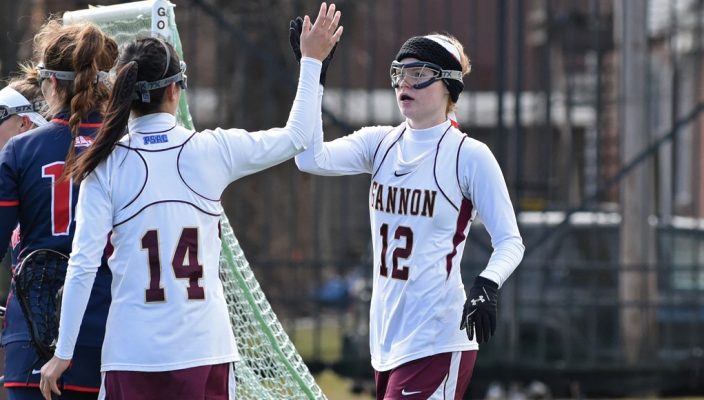 The Gannon University lacrosse team put together a strong second half, but fell just short in its bid to secure a road win, falling to Lock Haven, 13-12, Saturday at Lock Haven.
The loss dropped the Knights to 2-4 overall and 0-2 in Pennsylvania State Athletic Conference action going into Wednesday’s 4 p.m. match with Edinboro at McConnell Family Stadium.
Prior to the narrow loss at Lock Haven, the Knights fell 14-8 to Lake Erie on March 19 in a nonconference game at home.
Against Lock Haven, Gannon trailed 9-5 at halftime but roared back in the final 30 minutes and pulled even at 12-12 on Erin Rotondo’s goal with 1 minute, 8 seconds remaining in the game.
It was Rotondo’s fourth goal of the second half, and she now has 12 consecutive games of scoring multiple goals dating back to last season.
But the host Bald Eagles earned the ensuing draw and Braxtin Reddinger punched home the winning goal with just 23 seconds remaining in the game.
Rotondo scored five goals to lead Gannon and Rachel Tufts added four.
Contributing one goal apiece for the Knights were Alexa Bower, Maura McCabe and Courtney Young.
Tufts and Christina Zeher each registered one assist and Gannon goalie Erin Renwick stopped nine shots.
On March 19, Lake Erie bolted to an 8-3 first-half lead, with Ivy Carey, Rotondo and Tufts scoring first-half goals for Gannon.
Maddie Krock scored within the first three minutes of the second half for the Knights to cut the lead to 8-4, but Lake Erie answered with three straight goals by Anna Spin to make it 11-4.
Gannon rebounded to score three straight, with Kayla Shields netting two of them and Rotondo accounting for the other to pull within 11-7.
The Storm then put together three straight goals to expand its lead to seven, and Gannon would not threaten.
Contributing assists for Gannon were Shields with two and Bower, Eileen Kehrig, Rotondo, Haylee Tatar and Young with one each.
Following Wednesday’s game with Edinboro, Gannon will travel to meet Kutztown at 1 p.m. Saturday and then visit rival Mercyhurst at 4 p.m. Tuesday.

« Gannon raises over $15,000 during Relay for Life event Competitive cheer moves on to Daytona »