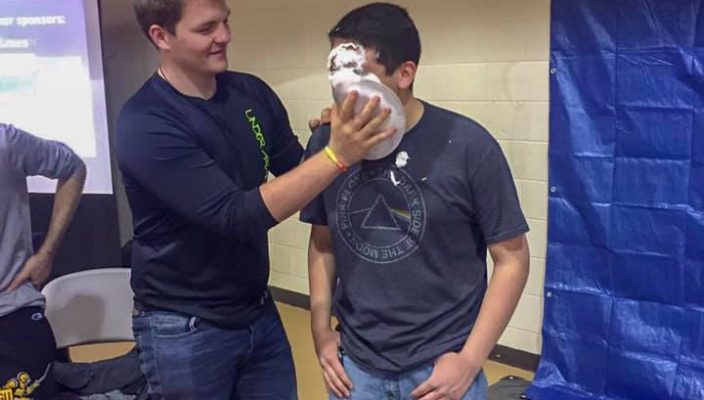 Gannon raises over $15,000 during Relay for Life event

Gannon University participated in the annual Relay for Life Saturday, reaching its goal to donate more than $15,000 to the American Cancer Society.

Relay for Life took place at Gannon’s Recreation and Wellness Center, where many teams joined together from noon until 10 p.m. to raise money to support cancer research.

A registration table was set up at the entrance alongside of the T-shirt and Luminaria sale.

The event utilized the center’s three main basketball courts. Supporting teams were set up at different tables along the borders of the court so when teams walked by, they would stop and donate to the cause.

As promised, a large number of Greek Life teams were present.

Runners were provided with free refreshments and a device that counted each team’s steps. All throughout the event, motivating music played to keep people going and walking as much as they could.

Many participants brought family members who have been affected by cancer to experience the event and be part of it.

During the event, many expressed their motivation to participate and reason to support this cause.

Zheng said that even though cancer hasn’t affected her life directly, it has affected others in her community.

“I volunteered at Relay for Life because I think it’s such a powerful way to fight back against cancer, as well as to celebrate cancer survivors,” Zheng said.

“I have been very fortunate to not have someone close to me diagnosed with cancer, but many of my friends have, so when I relayed this year, I wanted to keep them in my thoughts and prayers.”

Lohitai represented AST, participated in the step challenge and said she walked for about an hour and visited other tables to support the effort.

“I wanted to do it because cancer affects everyone,” Lohitai said.

“It’s awesome that Gannon sponsors this event and so many people support it and find new creative ways to fundraise for a good cause.”

Manion said that his decision to participate Saturday was due to personal experiences his family has gone through.

“I chose to volunteer for Relay for Life because my dad has been diagnosed with cancer multiple times, so being able to raise money for cancer is something that is close to my heart,” he said.

His team decided to raise money by donating money to throw pie at other brothers’ faces.

“Getting pie thrown in my face was interesting because I have never experienced something like that before, but I was happy to help because it is for a good cause,” he said.

« Finding God on Gannon’s campus: Uncover moments for spirituality during the Lenten season Professor finds his rhytmn outside of classroom, follows dream »