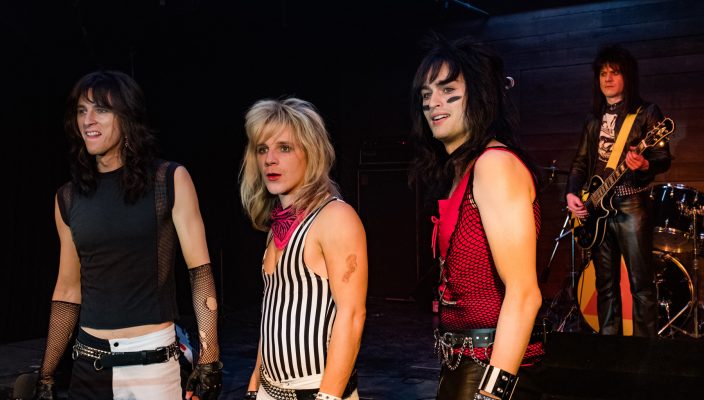 For years I have been a casual fan of Motley Crue.
I’ve rocked out to their more mainstream songs like “Dr. Feelgood” and “Kickstart My Heart,” and have even branched out to lesser known songs, but I have never considered myself a true fan of theirs.
So when I saw that a biopic about the band was making its way to Netflix called “The Dirt,” I was interested enough to watch the trailer.
The trailer then sent me into a frenzy of excitement to see the film, as it looked pretty good.
I had just finished up seeing “Bohemian Rhapsody” and I was definitely in the mood for more movies that surrounded music groups.
After all the waiting and anticipation, I have to say that Netflix’s “The Dirt” did not disappoint. “The Dirt” follows Motley Crue’s rise, eventual fall and reunion in pretty typical biopic fashion, and while it may be a tad formulaic, there are some interesting additions that “The Dirt” adds to the typical recipe.
Similar to “A Futile and Stupid Gesture,” a Netflix title that covered the life of National Lampoon creator Doug Kenney, “The Dirt” features frequent and prominent fourth wall breaks. This works to add a bit of insight into what the characters are thinking, and adds comedic elements to the story as references the fact that it is a movie, “Deadpool” style.
This is fun to see, and reminds the audience that while what they are watching is mostly factual, there are definitely some artistic liberties taken.
These liberties and omissions were a point of contention among other reviews that I read, but in service of the greater story, I think that they are warranted.
Anyone who has ever shared a dorm or apartment with me knows how much pride I take in my surround sound setup, and “The Dirt” is the perfect movie to show off just how impressive the sound mixing of a movie can be.
For the most part the movie plays out like one normally would, with most of the sound coming through my center channel and the surround sound mostly adding to the ambiance.
The concert scenes of “The Dirt” completely turn this idea on its head, and the surround sound is allowed to stretch its legs a bit.
There is a good amount of introduced reverb and bass that really transported me to the cramped and dirty clubs that the band was playing in.
On a normal recording of a song, there is a certain amount of balance that is assumed between the treble, midtones and bass.
Anyone who has been to a rock concert will tell you that this delicate balance is pretty much lost when the band has to compete with a crowd of a thousand screaming fans.
“The Dirt” mimics this well and really added to my feeling of immersion.
If you have the opportunity to see this in surround sound, I would highly recommend it, and if you can’t I would definitely say to wear good headphones.
I just don’t think that you can get the same feeling through television speakers or even a sound bar.
Normally, when I like a movie, I recommend it to everyone.
This is not that kind of movie.
“The Dirt” is made for a very niche audience who knows what they are getting into.
Full frontal nudity, constant swearing and very graphic depictions of drug use and violence would earn “The Dirt” a hard “R” rating if this came out in conventional theaters.
So if you do decide to watch this, which I highly recommend you do, just keep that in mind.