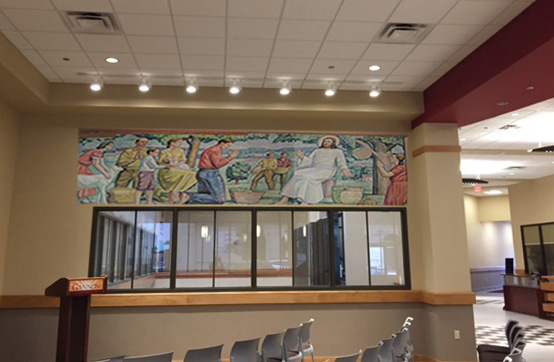 As blue skies and sunshine finally begin to grace Erie, it is the perfect time to lace up a pair of walking shoes and explore the city.
A trip to the Erie Art Museum is always a good choice to pass an afternoon.
A visitor could spend hours wandering the galleries, poring over pieces beautiful and intricate, silly and interactive, evocative and introspective.
While EAM is packed with thought-provoking exhibits, it is certainly not the only place to find art in Erie.
A walk down State Street reveals colorful murals interspersed with more traditional facades.
The side of Plymouth Tavern sports one such mural that transports viewers to the summer of 1813.
Rising 25 feet tall and stretching 50 feet wide, it depicts the construction of the USS Niagara.
The battleship was assembled in the Erie bay, sheltered from opposing naval forces by the protective curl of Presque Isle.
While that work commemorates Erie’s maritime history, other public displays simply add joy and visual interest to the landscape.
A couple blocks closer to the bayfront, Voodoo Brewery’s outdoor patio mural is a perfect example.
Grinning candy skulls dance over a colorful mosaic in this piece, which rises about 10 feet tall and stretches the length of the courtyard.
Local artist Simone Welsh is responsible for designing and painting this State Street staple.
Gannon University’s campus also contributes to downtown public art with the mural along AJ’s Way.
Inspired and designed by a freshman class taught by Carol Hayes, an instructor in the English department, the mural weaves together many beloved aspects of life at Gannon.
Each school is carefully represented, along with artistic, athletic, spiritual and relational dimensions of student life.
The Gannon Knight even makes an appearance, as a rolled-up copy tossed by a delivery boy on bicycle.
Twelfth Street is not left out of the mix, either.
The closed factories along the stretch of 12th between Sassafras and Liberty are juxtaposed with a vibrant Rosie the Riveter-style mural on one of the buildings.
The denim-clad woman is painted in classic comic book style, flexing her bicep and arching her brow.
“Rust Belt?” her speech bubble challenges. “No way, think Robust Belt!”
Art has the power to not only brighten a landscape, but also promote thought and discussion.
The Rosie mural, for example, adds a pop of color while also drawing attention to Erie’s economic fluctuations and revitalization efforts.
While Erie already has a thriving public art scene, a new mural is in the works for Gannon’s CBI building on State Street.
Details concerning its content and installation will be highlighted in an updated issue.