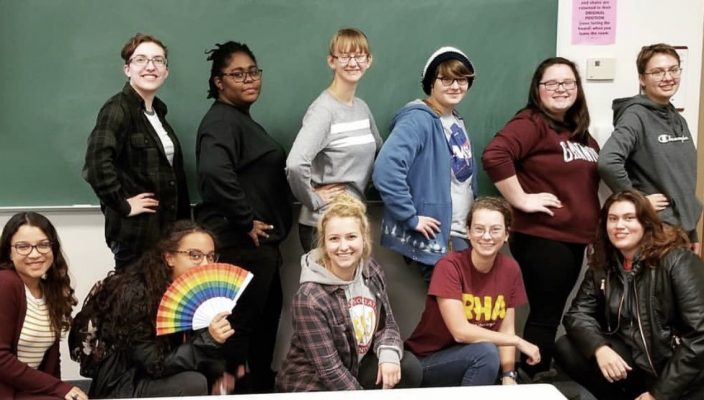 When choosing a university to spend their collegiate years, students tend to gravitate toward a campus where they feel most comfortable.
Some may join sports, Greek life or clubs to get involved and find their people.
Gannon University offers a variety of clubs for students of all different interests.
One of these is the GU LGBTQ+ club. Formerly known as the LIFE club, or Love is For Everyone club, the club started nearly 10 years ago to provide a place of camaraderie and support for LGBTQ+ students, faculty, staff and their allies, as well as to provide visibility and outreach to the Gannon and greater Erie communities.
Over the past several years, the club has been on-and-off as student leaders graduated or stepped back.
GU LGBTQ+ co-presidents Adelai Flowers, a senior software engineering major, and Alex Stauff, a junior biology major, became interested in revamping the group during the fall semester and have found a lot of other students who were interested too.
“The biggest thing we’ve accomplished so far has been gathering a group of interested people,” Stauff said.
“We tabled at the Wellness Fair, and we’ve also made some connections with local community partners, including the volunteer-run Erie Gay News. In the future, we hope to deepen our connections in the greater Erie area as well as team up with APB and other groups to hold events on campus.”
As of right now the club has 10 core members, but they are always open to new members, even those who aren’t LGBTQ+.
According to New Ways Ministry’s website, only 130 universities in the U.S. are known as being LGBTQ+ friendly, and Gannon has been named one of the chosen.
To be recognized as an LGBTQ+ friendly campus, an institution must do one or more of the following: “host a recognized student organization about gender and sexuality, offer counseling services specific to LGBTQ+ students, have a non-discrimination policy in place, provide an office tasked with supporting LGBTQ+ community members, or have some public affirmation in place.”
Allison Boyer, a sophomore nursing major and the GU LGBTQ+ social media chair, said that being a part of this club has bettered her college experience.
“I feel like I have more of a voice,” Boyer said.
“Also, by promoting the club I feel like I’m helping make our campus a more accepting and welcoming place. My advice would be to encourage students to join a club if they feel passionate about it and want to help others feel more comfortable and welcomed on campus”
The overall goal of the GU LGBTQ+ club is to educate the Gannon, Erie and Pennsylvania communities about issues pertaining to sexual orientation, gender identity and acceptance and to serve the Gannon, Erie, and Pennsylvania communities in any way compatible with the purpose of this organization.
For more information, reach out to the GU LGBTQ+ presidents or follow Instagram page @lgbtq_gu.