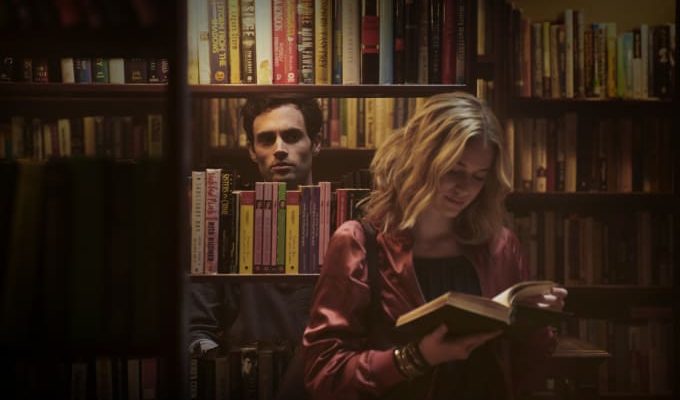 Netflix’s ‘You’ gives thrilling look into the minds of stalkers

The Netflix original crime drama “You” gives an inside look of what is behind the minds of a stalker.
This psychological thriller is set in modern-day New York City and follows bookstore manager Joe Goldberg (Penn Badgley) as he tries to woo broke NYU student and aspiring writer, Guinevere Beck (Elizabeth Lail), by manipulating everything and everyone around her, including her wealthy best friend Peach (Shay Mitchell).
After Joe first meets Beck at his workplace, Mooney’s bookstore, he quickly becomes obsessed with her and tries everything he can do to insert himself into her life.
Thanks to social media, Joe can easily stalk Beck and learn everything about her.
He soon gathers enough information to figure out where she lives, her relationships and places she hangs out.
Badgley narrates most of the series, so a lot of time is spent in Joe’s head while following him through everyday life, his surveillance and even his kidnapping errands.
The show includes a few flashbacks of Joe’s former lover, Candace Stone, who is rumored to be missing or dead.
When Joe isn’t obsessing over Beck, he is caring for his younger neighbor, Paco, while his mother’s boyfriend is being abusive to her and him.
Badgley is best known for his work on the early 2000 hit “Gossip Girl” as Dan Humphrey, the mastermind behind all of the show’s drama.
This experience made Badgley’s performance in “You” much more believable.
The show is exciting and keeps you on the edge of your seat as you guess what Joe will do next in his plot to get Beck to himself.
This series is based on the novel of the same name by Caroline Kepnes that was released in 2014.
“You” is a satire of the popular romantic comedies that show a man is willing to do whatever it takes to get the girl of his dreams, even if that means taking invasive and extreme measures to get there.
It resembles other famous works, such as “Gossip Girl,” “Dexter” and “Gone Girl.”
Although “You” has a few slow moments, it soon speeds up with loads of drama to keep you zoned in.
Victoria Pedretti, James Scully, Jenna Ortega and Adwin Brown will be joining the cast for the upcoming series.
Pedretti has been cast to play Love Quinn, an aspiring chef and health guru in Los Angeles, who will be Joe’s new love interest.
The series received a 7.9/10 on IMDb and a 92 percent rating from Rotten Tomatoes.
Netflix has renewed the show for a second season premiering later this year.