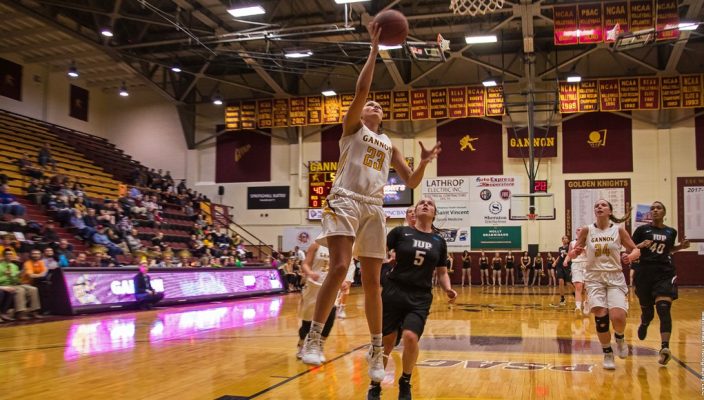 The Gannon University women’s basketball team had its two-game winning streak snapped on Feb. 6 in a home loss to Seton Hill, and the Knights dropped their second in a row to visiting Indiana University of Pennsylvania Saturday.
Chelsea Rourke had a career-high with 21 points, shooting for 8 of 13, and missed out on a triple double by a single rebound in the 83-69 loss to Seton Hill at the Hammermill Center.
Freshman Tori Obenrader recorded a 13-point effort against Seton Hill and followed it up with eight points in Saturday’s 66-52 loss to IUP, earning her a PSAC West Freshman of the Week award for the fourth time this season.
Saturday was Gannon’s Make-A-Wish fundraiser where the Knights invited fans to bring a taste of Hawaii with them while walking into the Hammermill Center. The game also featured performances by Polynesian dancers.
Make-A-Wish is a nonprofit organization that grants wishes to children with critical illnesses. There was a huge turnout Saturday, showing Gannon’s support of the foundation.
The Knights put up a tough fight while falling to the sixth-ranked Crimson Hawks Saturday, trailing just 34-31 at halftime.
Gannon continued its strong play in the third quarter and actually led by three points, 46-43, with 2 minutes, 38 seconds remaining in the quarter on Boston McKinney’s jumper. McKinney was making her first collegiate start.
Gannon hung tough early in the fourth quarter, trailing 49-48 a minute into the quarter, only to see IUP pull away down the stretch. The Crimson Hawks scored 13 of the next 15 points to take control.
Sophomore Sydney Mitchell was the only Knight who scored in double digits, dropping in 14 points.Mitchell had recorded double digits in four of the last six games for Gannon.
The Knights had a balanced effort in the boards with four players grabbing five or more rebounds.IUP remained undefeated on the road this season and has held its last five opponents to under 60 points. The Knights also faded down the stretch in the loss to Seton Hill.
Gannon trailed 43-36 at halftime and 56-53 going into the final quarter, but the Griffins outscored the Knights 27-16 in the final quarter.
In addition to Rourke’s 21 points and the 13 from Obenrader, Elise Torrence contributed 10 points from Gannon. Nicole LaCava, who leads Gannon in scoring with a 13.6 point-per-game average, was held to just two points in the loss.
The Knights fell to 11-13 overall and 7-9 in the Pennsylvania State Athletic Conference.
Gannon will travel to take on California University of Pennsylvania at 5:30 p.m. Wednesday and will look to avenge a 66-52 loss to Cal U earlier this season.The Knights will then return home to host Edinboro at 1 p.m. Saturday at the Hammermill Center. Saturday’s game is Alumni Appreciation Day and the newest class in Gannon’s Athletics Hall of Fame also will be inducted that day.
Among the inductees into the Hall of Fame will be former women’s basketball standout Carrie (Nolan) Stoczynski, a 2010 graduate and a member of a Knights team that finished No. 2 in the nation and won 37 straight games.
She is the school’s all-time leader in games played (129) and free throw percentage (86.9).