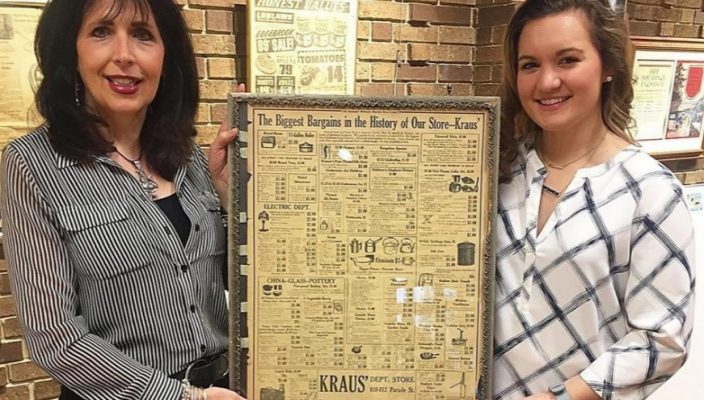 Imagine a world where interest rates were 7.25 percentage and a full year of tuition at Mercyhurst University was $200. To most students, this probably sounds like an alternate universe. In reality, these numbers were featured in actual advertisements that previously ran in Erie County.
Schuster Gallery, located on the first floor of Gannon University’s Center for Communication and the Arts, is currently hosting “ExpiERIEnce the Best of Erie’s Past Ads.” This student-curated exhibit features historic promotional pieces from radio, television and print sources.
The 10 students in Anne O’Neill’s Event Planning class have worked tirelessly to gather materials and plan the layout of the exhibit.
Annie Ciacchini, a junior public relations and advertising major, said that putting the show together was very rewarding.
“The whole process of creating this show has been super fun and a tad stressful,” she said. “But seeing all the wonderful advertisements hung up on the walls in the Schuster Gallery is so amazing.
“I am so thankful for Anne, our professor. She truly put so much work into this show and it definitely shows. It was a very fun class, and we all bonded over creating the show.”
Erie landmarks including Mercyhurst University, Waldameer Amusement Park and the Boston Store are all represented, along with countless other companies. Some of the featured businesses are still around today, while others have closed their doors and are firmly ensconced in history.
One could spend hours wandering from ad to ad, chuckling at the old-fashioned phrases, charming illustrations, and ridiculously low prices, as well as finding unexpected surprises throughout the visit.
Waldameer’s poster entices customers to visit the “Joy Spot of Erie.” It includes a watercolor rendition of the park and quaint descriptions of its “gay midway,” “modern refreshment stands” and “young people’s dancing on Thursdays.”
The former Boston Store, familiar to many Gannon students on the corner of State and Eighth streets, is featured in all its glory in an old newspaper Christmas advertisement.
The department store behemoth closed in 1979 and the building remained abandoned until 1988, when it was renovated into a commercial and apartment building.
It was fun to travel back to a time when the Boston Store was bustling and “meet me under the clock,” referring to the iconic timepiece on the first floor, was a common phrase uttered around Erie.
Though not necessarily an ad, a December 1947 issue of The Erie Dispatch includes a column that seems quite humorous today.
Aptly titled “How Can I?,” the column includes a Q&A-style list that seems completely antiquated in the age of Google.
“How can I take care of feet that are hot and swollen?” and “What can I use as a substitute for cream in a cup of coffee?” are two such riveting questions that in 1947 may have required a letter to the newspaper and a week of eager anticipation.
While most of the pieces are charming and cheerful, several advertisements are likely to give modern viewers pause.
One such ad is for WICU TV. The ad includes a totem pole, a smiling cartoon character with a feather headdress named “Chief Eriez” and a proud proclamation that there are “608,000 happy viewers in the tri-state reservation.”
The exhibit runs Tuesdays through Thursdays from 11 a.m. through 4 p.m. until the end of January.
Additionally, Gallery Night will be held on Friday from 7 to 10 p.m. The Gannon family is invited to mingle with the student curators and enjoy light refreshments.