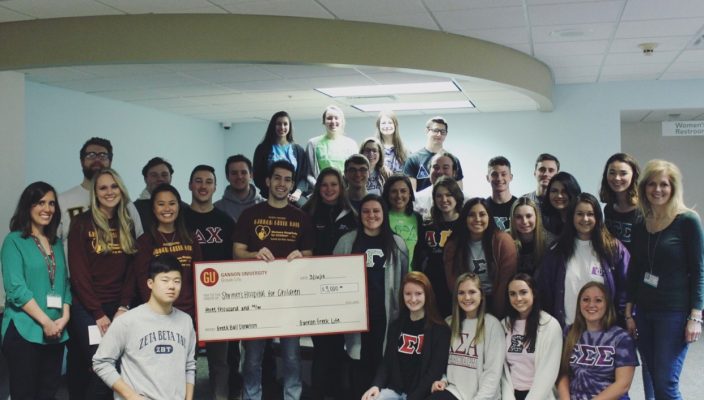 Greek Life becomes a part of the Gannon University culture

Walking around campus, it’s not uncommon to see students wearing Greek letter shirts.
Gannon University is home to seven fraternities — Alpha Phi Delta, Delta Kappa Epsilon, Delta Sigma Phi, Delta Chi, Zeta Beta Tau, Pi Kappa Alpha and Tau Kappa Epsilon — and five sororities — Alpha Gamma Delta, Alpha Sigma Alpha, Alpha Sigma Tau, Sigma Sigma Sigma and Phi Sigma Sigma.
The first men’s and women’s fraternities at Gannon were Delta Sigma Phi and Alpha Gamma Delta, respectively.
Since then, they have been joined by the additional chapters.
In movies and television shows Greek Life is often portrayed as a negative experience.
For example, they make the rushing process look worse than it is. The stereotype is that only good-looking, wealthy students are accepted into Greek societies.
However, that is not how it is in real life, or at least at Gannon.
During recruitment, the chapters narrow down which students would best represent their chapter academically and personality wise. Those behind Gannon Greek Life believe there is a home for everyone who rushes.
“Going through the rushing process, I thought that I wouldn’t be good enough to get into a sorority,” Gabriela Palombo, a sophomore physician assistant major and a sister of Alpha Gamma Delta, said.
“The reality of it was that rushing is not a competition like people make it out to be, but rather a time for you to find your place on campus with a group of people that accept and support you.”
Joining Greek Life is different for everyone. Some join because of a family member before them, to make friends or to boost their resume.
“I joined Greek Life because I loved the idea of creating a bond with other people that shared so many of the same ideals that I do,” Conner Wasser Kane, a sophomore pre-medicine, biology and brother of Delta Sigma Phi, said.
“Also doing all of the community service really rewards you with knowing that you are helping the community around campus, and doing things that actually make a difference.”
Being a part of Greek Life can also open doors for students involved.
The service work and social connections they make may benefit them in the future. “The opportunities are plenty,” Jacob Barilla, a sophomore forensic science major and brother of Delta Kappa Epsilon, said. “From connections on campus and in the community as well as leadership experiences and a group that has your back even in hard times and functions in its own wonderfully way yet simultaneously being so involved in campus.”
In Greek Life, chapters are able to nominate those of the opposite sex to be a sweetheart. To be sweetheart means to be viewed as an outgoing contributor toward a sorority or fraternity and holding close friendships with many or all of the members.
Austin Hancock, a junior healthcare management major and brother of Pi Kappa Alpha, was recently chosen to be one of Sigma Sigma Sigma’s newest sweethearts this semester.
“I chose to run for sweetheart of Sigma Sigma Sigma because they are an outstanding group of women who have been kind to me since I came to Gannon University,” Hancock said.
“Their strong bond as sisters, academic and athletic achievements and countless services performed in the community was something I wished to represent. I was very surprised when I heard my name called. I knew there were many others seeking to be sweetheart, and to be elected as such by the Sigma sisters is such an honor. I could not be any happier to be a part of this organization and represent what they stand for.”
If you or anyone you know is considering joining the Gannon Greek Life family, consider attending recruitment events. There are more than enough people willing to help you find your home.
“Most important point of advice is to go into rushing with zero expectations,” Callie Steele, a junior biology major and sister of Sigma Sigma Sigma, said.
“Keep your mind open to every sorority, or the possibility of not joining Greek Life. Just be yourself and have fun! Rushing is a once-in-a-lifetime college experience. Make the most of it.”