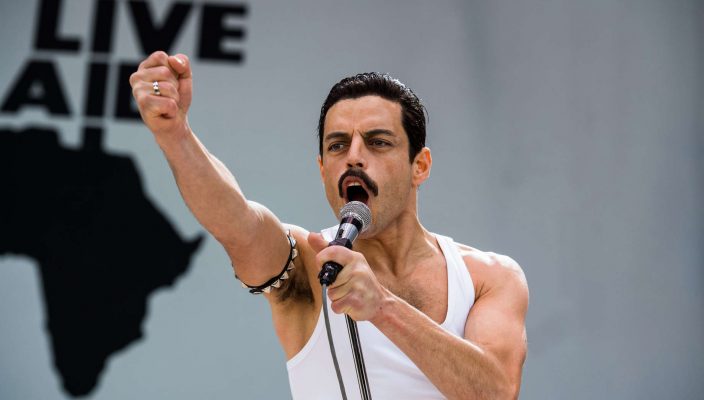 ‘Bohemian Rhapsody’ is the film Queen fans have been waiting for

“Bohemian Rhapsody,” starring Rami Malek, was released Friday to a $50 million opening weekend, and it has already amassed a whopping $145 million worldwide.
“Bohemian Rhapsody” is the story of Freddie Mercury’s career with the epic rock group Queen as they try and succeed to become a famous rock band.
The film follows the band’s ups and downs and does a great job at showing the ins and outs of all that Mercury and the rest of the band had to overcome to become the superstars they were destined to become.
Malek’s performance as Freddie Mercury is something to behold. Not since Jamie Foxx portrayed Ray Charles in “Ray” have I seen someone who completely embodied the character they were playing.
Not only does Malek have all of Mercury’s mannerisms down to a science, he has completely integrated Mercury’s unique idiolect into his performance.
Most importantly, Malek is able to mimic Mercury’s iconic stage presence and larger-than-life personality in every scene he is in.
While just about every other performance in the film is pitch perfect, Malek really made his portrayal of Mercury his own, and I would be shocked if he does not receive some kind of acknowledgement from the Academy for this performance.
As a lifelong fan of most of Queen’s music, I was supremely impressed by the lengths that the filmmakers went to to include as many songs as they did.
The soundtrack, which has topped at 17th on the Billboard Top 40, is plastered with classic song after classic song. Impressively, at no point in the movie does the music seem to overpower the storytelling of the film itself.
Each song blends seamlessly into the overall story, and works to enhance each scene as opposed to hindering it. I cannot tell you how many times I have found myself humming “Fat Bottomed Girls” or “Killer Queen” since I saw “Bohemian Rhapsody,” and I could not be happier about it. The movie has given me a new appreciation for most of the songs that I grew up listening to.
“Bohemian Rhapsody” boasts some pretty amazing cinematography right off the bat. The opening of the film shows the morning before Queen’s iconic Live Aid performance, and through very compelling camera work, the filmmakers are able to convey the complex work that went into the rigging and setup of their set.
The audience is taken on a journey of the inner workings of the concert while being intercut with images of Mercury preparing to give one of the greatest performances in the history of rock ‘n’ roll. The high energy of this opening scene sets the movie up for greatness within its first few minutes.
Expert editing and direction work with the artful cinematography to make an almost 2 1/2-hour movie go by like the snap of a finger.
While “Bohemian Rhapsody” was advertised as a Freddie Mercury biopic, it is more so a history of the band Queen as a whole. Don’t get me wrong, Mercury is the star of the show, but each of the three other members of Queen plays just as large of a part in the overall story as Mercury does.
The actors all have a visual chemistry, and it is very easy to believe that they really are a family, and not just people who sing together.
As a little bit of an aside, there is a part of “Bohemian Rhapsody” that made me laugh out loud in the middle of the theater.
Mike Myers has a small part in the movie as a music executive who says that the song “Bohemian Rhapsody” will never play on the radio.
As a long time fan of the movie “Wayne’s World” this was just the best little gag, because “Wayne’s World” features an iconic scene where Myers’ character, Wayne, hops in a car with Dana Carvey’s character, Garth, and they proceed to blare “Bohemian Rhapsody” as they drive around town.
It was a bit of a niche ‘90s reference that I was pretty happy to see.
I absolutely loved “Bohemian Rhapsody.” I think it has something for everyone, and even if you do not enjoy the story, at least you get to listen to a couple of hours of epic Queen music.