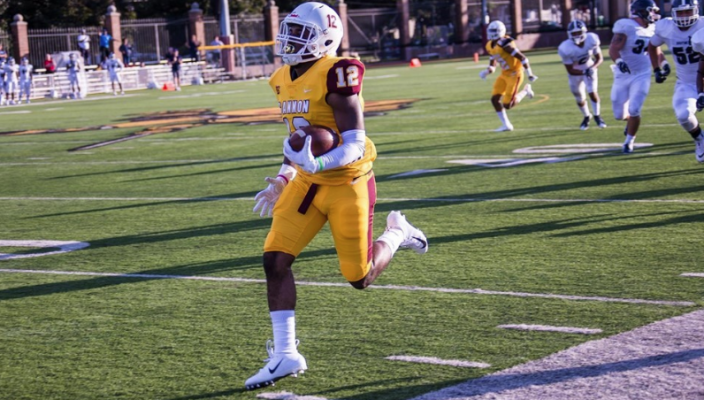 The Gannon University football team kept unbeaten Kutztown and its fans on the edge of their seats Saturday afternoon, leading the Pennsylvania State Athletic Conference pace-setters heading into the fourth quarter.
However, the last period would prove to be a different story as the Knights were outscored 26-0 on the way to a 48-33 setback at the hands of the Bears at McConnell Family Stadium.
The loss left Gannon 0-3 heading into Saturday’s PSAC West opener at Clarion. Kickoff is set for 1 p.m.
Preseason All-American running back Marcus Jones of Gannon was sidelined for the first half as a result of a targeting penalty that occurred the previous week against West Chester. Gannon appealed the suspension, but was denied.
Melvin Blanks, Jones’ replacement, took over the heavy workload in the first half and proved his worth, running for 92 yards on 15 carries.
Gannon popped out to a 23-6 lead midway through the second quarter, scoring through the air, on the ground and on defense.
The Knights had to go 99 yards on the first scoring drive. Jacardi Brooks capped the march by hauling in a 3-yard touchdown pass from Jimmy Keefe.
Kutztown answered late in the first quarter on the first of Eric Nickel’s five touchdown passes, but A.J. Satcher of Gannon returned a blocked extra point for two points.
The Knights’ Zevin Holley punched one in from a yard out to make it 16-6 and Gannon increased that lead four minutes later when defensive lineman Malik Bridgeman intercepted a tipped passed and sidestepped a would-be defender on his way to the end zone.
That put Gannon on top, 23-6, with 9 minutes, three seconds remaining in the second quarter.
Kutztown answered with two more Nickel touchdown tosses to reduce Gannon’s lead to 23-22 at halftime.
The high-scoring affair slowed down in the third quarter, as the only points came on Brian Strybel’s 25-yard field goal with 3:07 left in the period. That gave the Knights a 26-22 lead heading into the final quarter.
Rushes of 19, 10 and 20 yards allowed Gannon to drive down the field and watch Jones break a 20-yard touchdown run on the first play of the fourth quarter, upping the lead to 33-22.
That would be the final points the Knights would put on the board, though.
The Bears needed just two minutes to cut Gannon’s lead to 33-28 on another Nickel touchdown pass.
The last of Nickel’s five touchdown passes gave Kutztown the lead for good, and the Bears never looked back on their way to victory.
Keefe completed 26 passes for 248 yards, connecting with Alex Greenawalt seven times and Joey Cox nine for 87 and 77 yards, respectively. Despite playing only the second half, Jones finished with 71 yards rushing and caught three passes for 35 yards.
Kutztown’s Nickel completed 28-of-40 passes for 394 yards as the Bears piled up 579 yards of total offense to Gannon’s 434.
MATTHEW FASSNACHT
fassnach001@knights.gannon.edu