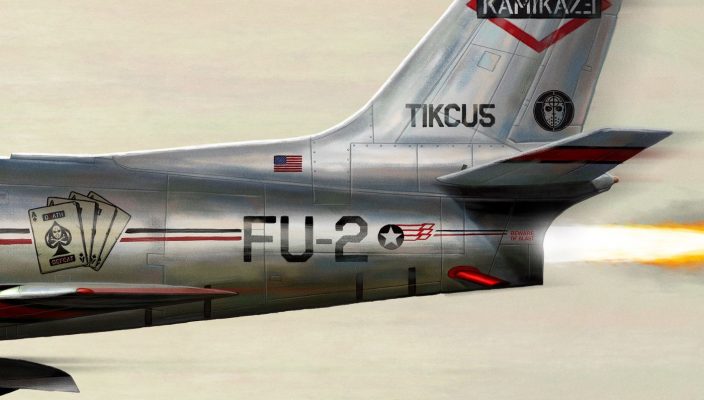 In all honesty, I was debating between doing a review on “Kamikaze” or doing a review on an abstract and obscure jazz record. But, then I saw the diss track that Eminem did against Machine Gun Kelly, and I knew what I wanted review.
Eminem’s “Kamikaze” is flat out a complaining record. About nine out of the 13 tracks are Eminem going after critics, responses and disease against his “Revival” record from 2017.
Plus, he takes stabs at several rappers in the game right now from Lil Yatchy to Tyler the Creator. But, I am getting ahead of myself. Let’s start with what went right on the record.
In general “Kamikaze” is worlds better than “Revival.” The production doesn’t sound as sloppy and the overall sound is more intentional than the half-hearted efforts on “Revival.”
It seems that Eminem took to heart much of the criticism on “Revival” and that is something that deserves some credit. Also, Eminem put more effort into his lyrics and sound of his flow.
We are living in 2018 and no one really cares how fast you rap. So, it’s nice to hear Eminem put some time into his words and slow down the pace of everything.
Lastly, Eminem is finally coming around to the times he lives in.
Not fully there yet, he is giving up on the sound that he had success with on “The Marshall Mathers LP.”
That was his past and if he ever wants to make a masterpiece once again he needs to revolve and renew.
Music is an always revolving industry and it’s one thing to incorporate sounds from the past and silly to use sounds from the present. Eminem put more effort into cleaner and more intricate sounds popular in 2000s. However, the glaring problem with the record is track after track after track is Eminem complaining how “Revival” didn’t get the attention or love that he thought it deserves
In all honesty this is not only repetitive, but it’s also extremely childish. Every artist goes through times when people hate a project and this isn’t the right way to get through it.
You must be able to come out of it with new knowledge and be able to get around it. You aren’t supposed to be like the 5-year-old at the playground when someone else takes over your slide.
Lastly, is how many of the tracks — “The Ringer,” “Greatest,” “Kamikaze,” and “Lucky You” — are Eminem going after rappers who are popular right now in the rap scene.
First, why was this necessary? It’s not like any of the artists were saying things against him, so why did he have to go against them?
Second, some of the disses went a bit too far. Specifically, the Tyler the Creator dis where Eminem inappropriately calls him out for saying he is gay.
Why was this necessary? When did Eminem’s producers think this was appropriate? There are so many questions that I have on this topic and the topics that he comes out with.
So, this leaves me with where Eminem is now. Machine Gun Kelly came after him and Eminem returns the fire. At this point Eminem is being a child and he is running his career down the drain.
However, he has come around to offering apologies to several artists, especially Tyler the Creator, which is the right step.
Where does Eminem go from here? Well that’s a good question and I’m out of room to go into it. Maybe another article.
Happy Listening, Gannon University!