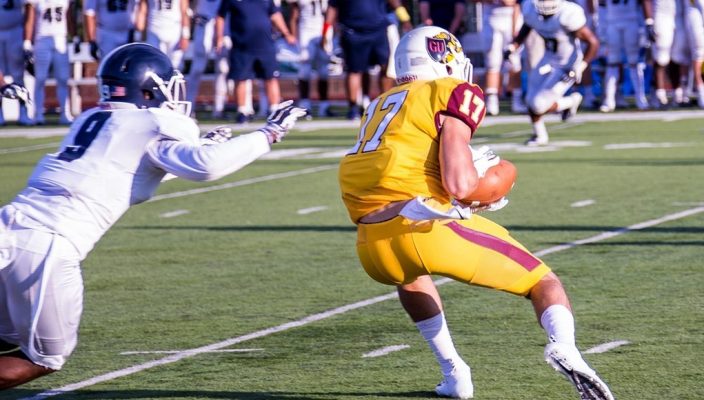 The Gannon University football team saw its record fall to 0-2 on the season with a 31-7 loss to No. 23-ranked West Chester in a PSAC crossover matchup Saturday in West Chester.

The Knights got off to a positive start, as Gannon defensive back James Simms recovered a forced fumble on West Chester’s first offensive play of the game at the Rams’ 10-yard line.
Standout running back Marcus Jones did his thing by running downhill and carrying it twice to the 1-yard line.
From there quarterback Jimmy Keefe scored the first points of the game for either team on a 1-yard run just 80 seconds into the contest.
Neither team was able to mount a scoring drive for a while, as the next four possessions resulted in punts.
But the host Rams put together a four-minute scoring march that ended with 3 minutes, 6 seconds remaining in the first period on A.J. Long’s 15-yard touchdown pass to Cody Boozel.Andrew Chegla’s conversion kick tied the score at 7-7.
West Chester then took control in the second quarter, scoring 17 unanswered points to build a 24-7 lead at halftime.
Chegla’s 28-yard field goal snapped the tie with 12:43 to play in the second quarter, and Long made it 17-7 with a 7-yard run that capped a 75-yard scoring drive midway through the quarter.
The Rams widened their lead to 24-7 with just 11 seconds remaining in the quarter when Long hit Lex Rosario on a 33-yard touchdown pass.
West Chester added another score early in the third quarter on Long’s third touchdown pass of the day, this one from 40 yards out to Rasheem Jones, giving the Rams a 31-7 lead.
From that point on, though, Gannon’s defense stiffened, allowing West Chester only one more first down.
On the defensive side, Martell Davis and Anthony Howard led Gannon with six tackles apiece while Geremy Paige added four.
Gannon held West Chester to just 51 rushing yards, but the Rams piled up 300 yards passing, all by Long.
Offensively, Alex Greenawalt had his best performance in a Gannon uniform, as he hauled in six passes for 105 yards, including a 25-yard reception in the fourth quarter.
The Knights also held the edge in average rushing yards with 2.4 per carry over Kutztowns 1.8.
Gannon proved to show success in the intense moments of the game, converting 3 of their 4 fourth down conversion attempts.
The true dagger to the Knights defense was in the redzone with Kutztown scoring on all three opportunities.
Keefe, in addition to running for a score, finished with 13 completions and 175 yards passing, but he also was intercepted twice.
Jones, a preseason All-American selection at running back after he amassed 2,176 yards rushing last season, was limited to just 62 yards on 20 carries.
Gannon will look to get into the win column Saturday at home when Kutztown visits for a noon kickoff.
Kutztown is coming off a big 34-31 win over California University of Pennsylvania and will come into Saturday’s game 2-0.