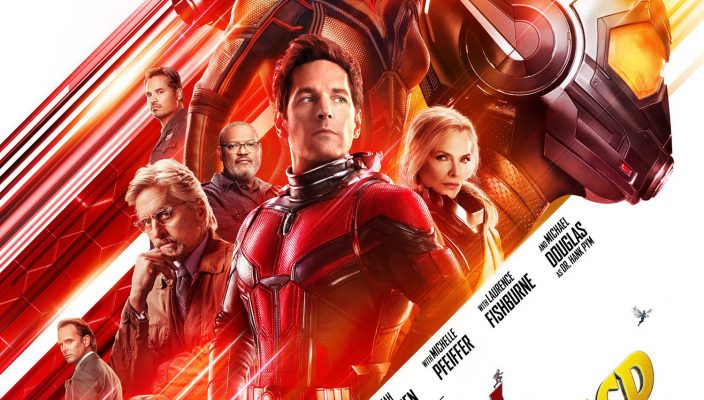 ‘Ant-Man and the Wasp’ improves upon predecessor

The latest addition to the Marvel Cinematic Universe, “Ant-Man and the Wasp,” is a perfect example of Marvel understanding what made the first “Ant-Man” movie great, and doing it again, but better.
“Ant-Man and the Wasp” picks up the story of Scott Lang (Paul Rudd) after he went to Germany to help Captain America fight Iron Man in “Captain America: Civil War.”
Lang is living through the final days of his house arrest when Hank Pym (Michael Douglas), his daughter and Lang’s love interest from the first movie, Hope (Evangeline Lilly), try to open a portal to the Quantum Realm in search of Hank’s wife and Hope’s mother, Janet (Michelle Pfeiffer).
When they open the portal, Lang sees a vision of Janet since he entered the Quantum Realm in the climax of the first “Ant-Man.”
Because Hank and Hope are in possession of the portal, they are being hunted by Ghost (Hannah John-Kamen), who due to a freak lab accident is constantly shifting between our realm and the Quantum Realm.
By using the portal, Ghost wants to drain Janet’s life force to save herself.
Although it helps to have seen the previous movies in the Marvel Cinematic Universe, or MCU, “Ant-Man and the Wasp” does a decent job of establishing all the characters’ relationships in a way that allows first-time viewers to get caught up on the story, but without retreading too much that veteran MCU fans do not feel like they are being pandered to.
This is the exact opposite of the latest “Avengers” movie, “Infinity War,” wherein it is pretty much essential that you have done the “required reading” of seeing all the movies in the MCU.
The visual effects of “Ant-Man and the Wasp” far surpass any other MCU. For me at least, there was not one shot in the entirety of the film that took me out of the moment and looked really fake.
This is probably due to the fact that most of the effects deal with water, metal and explosions.
Computers have a very easy time simulating these materials, but human skin has always looked just a bit “off,” and attempts to recreate it digitally normally fall into the uncanny valley.
Disney has recently tried to use CGI to digitally make actors look younger, a technique that has been perfected over many previous MCU films, including the first “Ant-Man.”
The first seamless use of this effect takes place in the beginning of “Guardians of the Galaxy: Vol. 2” where a young Kurt Russell is seen in the film. “Ant-Man and the Wasp” has perfected this art and shots of younger versions of Michael Douglas and Michelle Pfeiffer are needed to interact with real people with no disconnect with the audience.
These shots hold up to the highest amount of scrutiny, and I look forward to this effect being used in upcoming films.
All the performances in “Ant-Man and the Wasp” leave nothing to be desired. Everyone plays off each other in a way that makes you believe that they have all been through a lot together and are closer because of it.
The on-screen chemistry between Rudd and his onscreen daughter played by Abby Ryder Fortson has to be the most apparent and important aspect of the film. The two share a couple of quiet scenes together that give the movie a real heart.
Overall, “Ant-Man and the Wasp” is a thoroughly entertaining and genuinely fun addition to the MCU. Be sure to catch this one before it leaves the theaters.