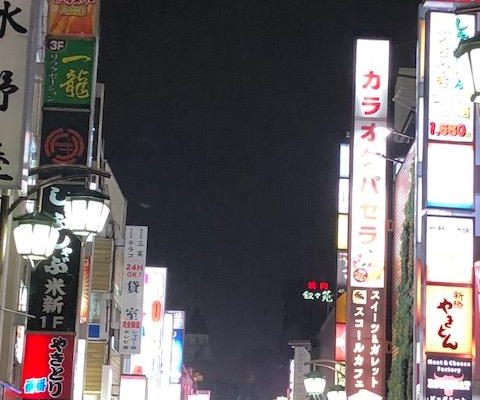 Adventure in the Land of the Rising Sun (Part 2)

Once the end of my junior year came, I found myself getting gradually excited for my trip to Japan. With the last week of school all wrapped up, I was ready to embark on my long-awaited trip to the Far East.
Throughout the year I attended meetings with my travel group to discuss what we were going to do on the trip. Through these weekly gatherings the group not only organized the trip, but got to know each other and form friendships throughout the school year.
Our group contained a very heterogeneous mixture of students from all over the school. Overall, the majority of people on the trip were juniors and seniors who were just as excited for the trip as I was.
When the day finally arrived, I was excited, but also nervous. This was my first time leaving the United States to go somewhere that had an almost completely different culture in addition to being so far away from the states.
This nervousness eventually faded away once I got on the plane and realized I was in good company with the people in my group who became my friends throughout the year.
The plane ride wasn’t all bad; I sat next to an elderly woman who was a translator from Hong Kong.
She was very nice and gave me a quick lesson on the currency of Japan that was surprisingly very interesting.
I was never a big fan of flying, but this flight to Japan wasn’t as bad as I thought it was going to be.
What surprised me the most was how an airplane could fly from Toronto to Tokyo on one full tank of jet fuel. Even though I wasn’t allowed to open my window (people were sleeping and I didn’t want to be “that guy”), I was still able to see what we were flying over on the monitor in my seat.
After the flight I could tell my friends that I flew over Russia and part of the Arctic Ocean in the safety of an economy class seat watching “Jumanji.”
Once the plane landed in Tokyo I knew this was going to be a great trip. Just by looking out the window upon landing I saw signs that I couldn’t read and a city that seemed to stretch forever.
It looked like someone took a city and copy and pasted it a bunch of times. The city seemed to go on forever, with no end in sight.
Leaving the airport I had my first experience with the neon animal that is Tokyo in the form of a subway ride from the airport to our accommodation.
At first, we were the only people on the rail car. However this soon changed as more and more business people came onboard, creating a claustrophobic atmosphere many would compare to a sardine can.
While to many, this might not seem like a fun time, to me, this was an experience. Never had I seen so many people in such a small space before.
It was fascinating to see how all of these people were coming from individual jobs, all of them having their own individual stories about their lives that I had no idea about. Where do these people work? Where do they live? Do they enjoy karaoke?
Once the train passed out of the underground metro system to above ground, I was given my first visual of Tokyo at night.
As the train zipped by the many towering buildings, the glow of the neon signs moved all around like lasers, making the subway car feel like a spaceship in the middle of a space war, being bombarded with lasers in the form of sensory overload courtesy of Tokyo nightlife.
In addition to the showering of LED and neon lights, as the train stopped we were greeted with the animal that is Akihabara station.
Once I climbed the stairs and exited the train station I was gifted with a 360-degree panoramic welcoming in the form of giant LED screens that took up entire sides of buildings, neon signs promoting everything from arcades to ramen shops to cafes and crowds of people as far as the eye could see.
It was at this moment I knew I had finally arrived in Japan. I was in the middle of being outside of my comfort zone, and Japan couldn’t have been any more welcoming.